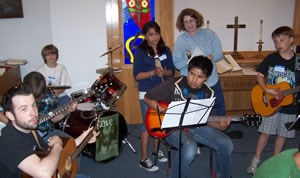 People from Fisher and members of Mt. Vernon UMC in Champaign, are reeling in pre-adolescent fish from their community to the new fourth through eighth grade youth group hosted by the church. After just a few months, attendance in the new ministry averages 20 young people.

The youth group is the brainchild of the Rev. Dr. Rachel Berry. She says there are several keys to the success of this ministry: “Great youth who invite their friends, great counselors who pick up and drive all the kids, great team leaders like Johnny who really know how to work with kids.....and LOTS of prayer!”

Johnny Kraps, Berry’s son, leads counselor training, games, the 4-6th grade Bible study group, and the MTV Praise band. “At all times, I look for where kids are shining to compliment them, and find out what’s going on in their lives,” he says.

Adult leadership of the ministry is a family affair in more ways than one. Ruth Brock,  a teacher at Fisher High School, and her son, Mike, round up youth every Thursday night, then lead crafts and Bible study. High schooler Aaron Weckhorst and his mother, Lynn, help with registration, games, group Bible discussion, and dinner. Rod Cameron transports his grandson, Carter, five of his friends, and participates in the Bible lesson. Berry’s daughter, Imy Berry, leads the drama workshop preparing skits to perform during closing worship or on Sunday morning.  Other counselors include Debra McCall, Kenny Zahnd and Donald Ugartes.

Amy Spenard, works at the Fisher Middle school and her four children attend. Through her job and her kids, Spenard has befriended many Fisher youth.  Asked why she goes about the trouble of tracking down the pre-teens and driving them to church, she replies, “I enjoy bringing them so the kids can learn and have the church experience.”

Illustrating what makes the time and effort worthwhile, she recalled, “One young person came up to me in school and asked if we could say a prayer at youth group for a fellow student who was dying of leukemia.

“Transportation can make or break a youth group,” Kraps notes. “Not only does it physically get kids to church, but it also proves to the youth how much people care for them.” Both Berry, who has a Ph.D. in psychology, and her son emphasize the positive environment which the counselors establish for the youth.

“Our counselors try to give the kids attention and praise when they do something well or treat someone the way Jesus would,” Kraps says.

By limiting the attention given to disruptive behavior and recognizing the kids’ successes, a safe environment is created so that even the youngster who’s normally a class clown can join a serious discussion.

One essential ingredient in the safe environment is the “No Put-Down Rule,” which requires any youth who gives another a put-down--even jokingly--to heal the hurt by giving the recipient three compliments.

What do the “fish” have to say about it? Drayton Purvis, a sixth grader at Fisher Middle School, explained, “It’s really fun. There’s so much stuff to do. I love all of it.”

Drayton participates in the Praise Band, the drama and craft workshops. He quickly felt accepted in the group to the point where he volunteered to lead the closing prayer one evening. He confessed, “I was nervous.”

His classmate, Quentin Roganbuck, summed it up for most of the kids:  “I get to hang out with my friends and worship God.”