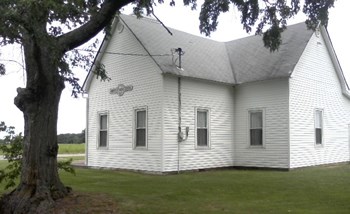 Editor's note: This brief history was written by Camilla Byers’ father, John Hatchett, as told to him by his mother, Mary Sullivan Hatchett. Mt. Etna UMC, located in Franklin County, completed its mission of 188 years of faithful ministry and was recognized at the 2010 Annual Conference. The congregation was organized in 1822 -- four years after Illinois became a state. Pastor Janice Devor read this brief history at the closing service on May 30.

It would not be easy to say just when or where the first log cabin was built in this neighborhood, but it is safe to say that the first settlers were hardy, fearless and most of them deeply religious. After they had broken the silence of the woods, by the strokes of their axes, in building their cabins they naturally thought next of a place to worship together.

By 1800, this community was thickly settled enough that the people could come together to hold meetings of religious worship. Much of the preaching was done by a man of the community, a little more versed in the scripture than the average, or by preachers who came from Tennessee and Kentucky to encourage and enlighten the settlers in spiritual matters. Unfortunately it has not been possible to get the names of these earliest preachers but some of the early preachers were, Thatcher, Spencer and Braxton Parrish, the latter being the best known. These men were Methodists but the Baptists were also well represented and appear to have had a larger following.
The meetings at first were held in brush harbors and in the people’s homes, the home of Thomas Summers being used most. This home was located a little more than a quarter of a mile east of the present site of the church. Edward Sullivan’s home, another prominent meeting place of these earliest Methodists, was situated about three quarters of a mile south but was later moved north of Knob Prairie Church.
As time went on more settlers came in, converts were added and the need for an organized church was felt more and more. As a result, in 1822, Mt. Etna Church was organized by Edward Sullivan, John Launis and Thomas Summers. They were unable at first to build a house of their own but joined hands, as it were, with the Baptists and built Knob Prairie Baptist Church. This was a log structure of course. Neither denomination could be perfectly satisfied but it served both for a while. An incident is related that reveals the growing desire of the Methodists for a church of their own. The foundation of Knob Prairie church building settled in such a way that the building leaned in an alarming degree toward the south. One good old Methodist lady remarked, half humorously and half seriously, that it was the Methodist part of the church trying to get back home.
After a while the Methodists withdrew from the Knob Prairie church and built Mt. Etna on the site where the grave yard is now located. This log building was used as a church and as a school. One of the best known preachers of this time was Thomas Reed, spoken of by people today as,”Old Uncle Tommy Reed.” Today, he sleeps in the grave yard almost in the exact spot where the church once stood. Near him also is buried Edward Sullivan and John Sullivan who followed the footsteps of his father, Edward, in building up the church.
At one of the meetings held by Uncle Tommy Reed a man by the name of Felt Little was converted and immediately he announced his intention of building a new building for the church. Plans were made and the church started on the opposite side of the road from where it now stands but Brother Little died before it was finished. The work was completed under the leadership of Joseph Rouintre, Cal Summers and Joseph Sullivan. Prominent among the preachers of this time were Flint, Thatcher and Davis.
In about 1906, the present church was built and continues to serve the community. Synonymous with the history of this church are the names of Thomas Sullivan, Silas Sullivan, Joseph Rouintre, Sarah Sullivan, Elizabeth Sullivan, Mary Laymon, and Will Conrad. In 1918, impressive services were held to commemorate the one hundredth anniversary of the beginning of Methodism in this community and a marker was placed at the front to perpetuate the memory of its beginning.
Today Mt. Etna today is a living church, living, growing and striving to live up to its traditions of the past. As one by one, the veterans drop out to take their places in the city of the dead, fresh and eager hands grasp the torch to hold it high. Thus the future of Mt Etna is assured.
Faith in action stories