To Give With Love 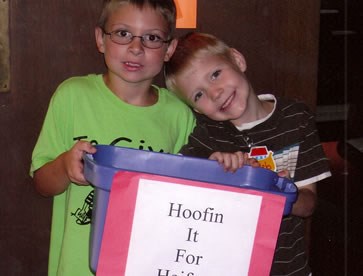 The Williamsfield UMC's Vacation Bible School, held June 28-July 2 used the theme To Give With Love, based upon the book Let the Children Give.

The entire week was about serving others, from the stories to songs to mission projects to art projects.

Each day, a mission project was introduced to the children during the opening. On Monday, Heifer Project International was discussed and the children went home with pledge sheets after they hoofed it for a heifer during recreation. In all, 3,722 steps were taken by the children present. On Tuesday, Gloria Wilson, a former teacher at Williamsfield and currently a teacher's aide at Galva, introduced the group to an organization that she has traveled with to Guatemala to distribute shoes. On Wednesday, during a day at the park, Rev. Randy Douglass told the group about his past trip to Liberia, his return trip there this fall and the need for seeds for Liberia. On Thursday, the children learned about Coats of Caring and on Friday, about Toys of Treasure.

During the week, more than 90 people visited the Retirement Home and Senior Citizens to perform music they learned at VBS. On Tuesday, Larry Mattson shared his Mini Train during recreation and on Thursday, Fleick Belgium Horses gave wagon rides during music and story.

A tree planting ceremony was held in the year Friday morning, in memory of Carol Moore and Chelsea Battye. A weeping, flowering crab tree was planted in front of the church. Several family members were in attendance for this special event. During story time that day, the children experienced a foot washing ceremony, based upon the New Testament story where Christ became the servant and washed his disciples' feet in the Upper Room just before the crucifixion.

On Saturday, more than 40 children, their friends and family joined together at Doubet-Benjamin Park for a program. Here are the reported numbers: