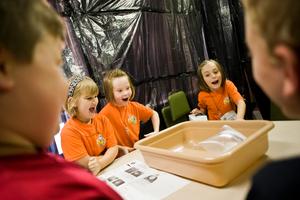 DUNLAP —Thursday's mission, the final one, brought about 70 kids to an exploration of a supernova.

But the students weren't at space or science camp. They were at a vacation Bible school.

This year's Bible school was called Galactic Blast, and organizers said it offered the students, ranging in age from 4 to 12, a unique kind of Bible study.

"The kids are doing crafts, Bible study and science experiments, and they really like it," said Amy George, co-director of the vacation Bible school. "Sometimes people think science and religion aren't compatible, so it's important to teach kids early on that they can be."

The school started on June 27 and ended July 1. Each day had different topics ranging from comets to creation of the universe to stars. About 50 volunteers were on hand to teach lessons, make snacks or do whatever else was needed to make sure the week ran smoothly.

On Thursday, the science experiment was to put vinegar, baking soda and water into a zipper-lock bag. They then waited for the ingredients to expand, bursting the bag, which represented a bursting supernova.

It also represented God's role in the lives of his followers.

"It shows God filling up all the spaces in our lives," said Tim Stear, a Bible school volunteer. "The bubbles represent the excitement that exists when God is in our lives."

It wasn't all science, though. Thursday's craft was to make a necklace with a beaded cross that changed colors in the light.

"It's like camouflage," said Lainey Campbell, 6. "I'm going to wear this every day. It'll look so cool on the Fourth of July."

While the main point of the Bible school was to teach kids about God's role in their lives while combining lessons in science and crafts, the students also raised about $800 toward one of the church's mission trips.

The six members of the medical mission team, which is comprised of a doctor and five nurses, left for the Ukraine on Sunday to serve the more than 50,000 children who live on the streets in the capital city of Kiev.

The kids were responsible for the bulk of the fundraising, meaning many had to dig deep into their piggy banks, though parents were known to throw in change or bills of their own.

And because they were successful, the kids got to slime youth pastor Phil George with a concoction made of green Jell-O, flour and water not unlike the famous Nickelodeon slime.

"The kids think up the gimmick every year," said VBS co-director Amy George. "It's something they really look forward to."