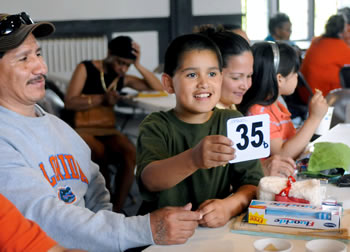 URBANA -- "Te gustaria que le ayudara?" has replaced "Would you like me to help you?" at one area food pantry.
Two dozen volunteers at the pantry offered by Urbana Wesley United Methodist Church have taken a basic Spanish class to learn how to communicate with Hispanic clients.
"I decided I would feel more comfortable if I have a few phrases to share – to make them feel welcome," said David Sattazahn of Savoy, one of the class members.
His wife, Ruth, added, "There was one time when a volunteer couldn't communicate with someone who was without (a knowledge of) English."
Wesley sets up its food giveaway in hallways and Sunday school classrooms on the third Thursday of each month.
Alejandra Coronel taught the four-session class at the Urbana church. "I work at the University of Illinois and have a bilingual consulting service, but this is what I love to do," Coronel said of teaching. She also has taught Spanish at the Champaign Police Department.
Before the classes even started, she translated some signs for Hispanic shoppers: sopa vegetariana, habichuelas and macarron con queso label cans of vegetable soup and green beans and boxes of macaroni and cheese. Her course objectives included family words, courtesy communication, pantry conversation and cultural awareness.
She told her students at the campus church that the Latino culture enjoys compliments and is less sensitive about them than some other cultures.
But as the English speakers tried to master Spanish and called themselves "stupid," she warned, "Do not use the term 'stupido' for 'stupid.' It's very offensive.
Use 'tonto,' which means 'crazy.'"
Judith Unger, the church member who organized the classes, said that on pantry days, "Our volunteers kept saying, 'I don't know how to say this.'"
The pantry has more than 600 volunteers, most not even members of the church, according to Unger. "It takes about 100 of them each month for the Wednesday setup and Thursday night distribution," she said.
On one pantry day, University of Illinois social work students assembled in the church sanctuary to fill bags and boxes with groceries and cleaning supplies.
Susan Garner said she decided to take the class after she could not explain to one woman that the numbered signs in the pantry were just to designate stations.
"She was picking up two things at Station 2 and three things at Station 3," Garner said.
Candice Sloan, a pantry volunteer and another student in the Spanish class, said, "I was saying 'mas comida, mas comida – more food, more food' (as patrons were shopping) and they got it. But that was all I remembered from my seventh grade Spanish."
Besides encouragement to select more food, some pantry clients need to be told there is a limit to amounts offered, according to material printed for the class. A typical exchange might be:
– Cuantas personas hay en su familia? (How many people in your family?)
– Por que? (Why?)
– Porque tienes mas de lo que esta permitivo. (Because you have more than what is permitted.)
In the church's Great Hall, where pantry clients assemble, volunteer Matthew Peek calls out, "26, veintiseis; 30, treinta" – shopping numbers in English and Spanish.
Peek did not take the Spanish class because he learned the language in the Air Force. He also translates at the Champaign County courthouse.
On an actual pantry day, volunteer and UI student Adam Faust, who had taken the class, admitted, "I need practice. I'd better get out the flash cards."
He stood by stacks of crackers and bags of rice as he directed shoppers who used church-supplied wheelbarrow-like carts and their own suitcases on wheels to collect food.
"I remember trying to help one mom and six kids, with more than six bags of groceries trying to get on a bus, one time," he said, explaining the current trend for shoppers to bring totes on wheels.
At the end of the corridor with stacks of food, Allen Smith, a volunteer from the Spanish class, asked Hispanic clients who were done shopping, "Su numero, por favor? (Your number, please?) He sent them outside to pick up unlimited amounts of surplus food. Cans of sauerkraut and cranberries were plentiful that day.
(Reprinted with permission from the May 2 issue of the Champaign News-Gazette.)
Faith in action stories