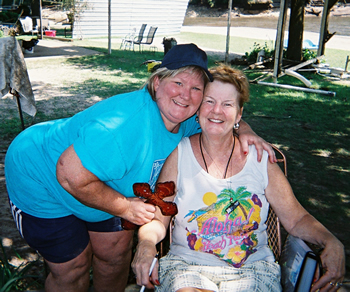 EAST ALTON - While residents of Delhi, Iowa, wondered why their homes had been suddenly destroyed, missionaries from East Alton First UMC felt they were in the right place at the right time to do God's work.
"It was so moving to be there right after this disaster happened," group co-leader Kimberly Allen said. "This was quite a spiritual journey for us."
The group of nine young people, ranging in age from 16 to 18, was adamant that they wanted to participate in a missionary trip this summer, Allen said.
Originally scheduled to travel to Oklahoma, Allen arranged for the team to work with a Cedar Rapids-based ministry called Block by Block instead when that trip fell through. They began their trip north on July 25 after the morning service.
"The day before we left the dam broke near the Delhi area, and we were asked to divert our time there," Allen said. "I had mentioned to the coordinator, Becky Woods, that we had been first responders when the Wabash levee broke near Lawrenceville."
The East Alton team had just begun helping victims of the 2008 flooding with their rebuilding efforts when Woods asked them if they could leave immediately for Delhi.
"She told us that no one was there to help them - that their spirits were broken - so we said we'd go," Allen said. "We got there around 3 p.m. on Monday and the dam had broke Saturday night."
Sent to the hardest-hit enclave, the first thing the group tried to do was assess who needed what kind of help. They arrived on the scene of the disaster even before the Red Cross.
Created by what is now a privately owned dam across the Maquoketa River, the Delhi area received approximately 10 inches of rain in the week before the breach. Built in 1929, the approaches to the dam gave way under the stress.
"These were (full-time) homes for most of the people we helped," she said. "They worked hard to have these retirement homes - they were their futures - and it's been a total loss for these people."
The group focused its cleanup efforts on a dozen or so homes flooded with 4 to 6 feet of water. The water had receded by the time they arrived, but the shock and devastation had not.
"It was like everything had been sucked to one side - there were dishes, pictures and furniture covered in mud in the corners where the water flowed to," Allen's husband, Mark, said. "It was heartbreaking to see people suffer a total loss like this."
Along with cleanup help, the couple said residents needed hugs and someone to talk to about their losses.
At the suggestion of a church member, the group happened to take along 30 to 40 Care Bears.
"We were so humbled by how people would cry when we gave them a little-bitty stuffed bear," Kimberly Allen said. "In some cases, it was all they had."
For the four adults chaperoning the teens, one of the most poignant aspects was watching how much the young people gave of themselves and how hard they worked from morning well into the night for three solid days.
Moved by the residents' plight, the teens unanimously decided to share what food they had with the flooding victims, bringing the whole community together in a time of tragedy.
"We were sitting in a pile of rubble, surrounded by destroyed homes," Kimberly Allen said. "But we were laughing and praying together - it was amazing."
The group included: Ciara Allen, 17, Nika Allen, 16, Jay Fry, 17, Jessica Harris, 17, Mandy Meyer, 16, Kaaleb Moorefield, 15, Samantha O'Daniell, 17, Travis Sosnock, 18, and Taylor Weigler, 18.
"This was such a rewarding experience for the kids," she said. "We always tell them stories from the Bible but that doesn't always feel like real life for them.
On a mission trip, they have the sense that God is real."
Feeling that their lives have been forever changed and a lasting bond created, the group has been invited back to visit Delhi whenever they can.

"The hardest thing we had to do was leave because there was so much more that needed to be done," Kimberly Allen said. "Our youngest daughter didn't want to go when she learned that we didn't get to one elderly lady - we wish we could have stayed longer."

(Reprinted with permission from the Alton Telegraph newspaper.)