Challenge Leads to 'Beast' of a Trip 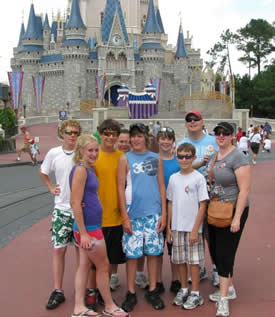 By Robert Schoolcraft
Pastor, Beardstown UMC
BEARDSTOWN -- It was a “beast” of a trip! The trip entered the planning, and planting, stage nearly a year and a half ago.
The Sunday School Superintendent began questioning as to why there wasn’t a Junior High/Senior High Sunday School class anymore. The answer was simple; there were no youth and, therefore, no teacher. I took the concern to the Church Council. They, too, were concerned that we had no Junior  High/Senior High Sunday School class.
The next Church Council meeting, I asked how committed they were to having a Junior High/Senior High Sunday School class. The answer was very committed. I pressed more and asked HOW committed. The reply was VERY committed. It was at this point the journey began.
Since we were beginning with a clean slate, I asked if they were willing to send youth with perfect attendance for a year to Disney’s Magic Kingdom. “Yes” was the enthusiastic reply. I then asked, “Do we have a teacher for the class?” After hesitation, they asked if I would teach the class. I agreed if I could teach in a non-traditional manner.
They agreed.
A beginning date was set. We didn’t know what to expect. Would anyone attend? Would everyone attend?
Needless to say, it WAS a concern. After all, many youth (and adults) would love to visit Disney’s Magic Kingdom.
The date arrived and there were 11 in attendance. I opened class with prayer. I then asked those who had attended Sunday School before why they had quit attending. “It’s boring”, was the answer. I then asked the group as a whole what they thought of school in general. “It’s boring”, was the answer.
“So the only reason you are here is to go to Disney?”
“Duh!”
It was what I expected. I then distributed the student Bibles and opened them to the first Chapter of Acts. I said, “I want you to read the first 15 verses and I am going downstairs to get a cup of coffee.” I returned shortly and asked if they had completed the reading. There was laughter.
Once again I stated: “So the only reason you are here is to go to Disney?” Nearly everyone said, “Yes.”
I closed their student Bibles and placed them on the shelf. I then said, “Ok, let’s go shoot pool.” I will never forget the look on their faces as we went to the game room.
I stated they had to choose someone to break. They did. After he chalked his cue stick and was about to break, I said, “if you scratch you have to give me a ten commandment.”
“What’s a ten commandment?” one asked. I distributed a copy of the ten commandments to them. Once again it was time to break. And once again, I interrupted.
“You are not playing “eight ball”; you are playing “rotation”. (That means one has to make the one ball first, then the two, and so on.)
There were no balls made on the break. The next youth missed his shot. The third youth made the one ball. I asked him to take the ball out of the pocket and look at it. He did and said it looked like a one ball. I asked him to look closer. He then replied, “it looks like eleven or something on here.”
I had taken an erasable marker and had written “1:1” on the ball. I replied, “that is Acts 1:1 … that is your memory verse for the week. As class progressed, we adapted ping-pong, foosball, and some other games using the same premise.
Nine youth completed the year with perfect attendance. I stressed they had to memorize the ten commandments and selected verses before they could ride the rides at Disney. In other words, they could go to Disney with perfect attendance but if they were to ride the rides, there were additional requirements. They fulfilled the requirements.
They knew that as they neared the head of the line at Disney, I would ask them for either a ten commandment (I would just give a number) or I would ask for one of the selected memory verses. If they could not answer, they went to the back of the line with one of the chaperones.
I find this to be a radical but effective way to reach our youth. Oh, and I learned that “beast” is the new term for “cool”.
Faith in action stories