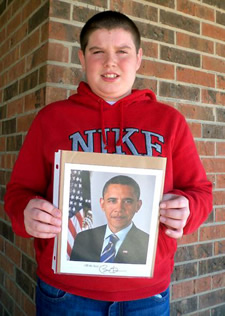 KNOXVILLE -- If Alec Lester thought it was cool to be cited by state legislators for his efforts in raising funds for the Knoxville Food Pantry, imagine what the 13-year-old Knoxville boy was feeling when an envelope from the White House was awaiting him after school one day last month.

In the brown envelope was a personally signed thank-you letter and an autographed photo from President Barack Obama, congratulating Alec for his charitable efforts.

Last month, State Rep. Don Moffitt (also a member of Knoxville UMC)delivered Alec a citation for his service from the Illinois House of Representatives. The citation acknowledged Lester’s efforts in raising money for the Knoxville Community Food Pantry and was signed by House Speaker Michael Madigan.

Alec is the son of Scott and Barbara Lester of Knoxville.

Barbara Lester knew she was dealing with something special when an envelope bearing the White House logo arrived at their home last month.

“I told Alec to be careful with it,” Barbara said. “You know how 13-year-old boys can tear into things.”

After Alec carefully opened the envelope, he found an autographed photo and a letter which read:
Dear Alec:

There are few things more rewarding than learning about young people who recognize their power to make a positive impact on the world around them.

By setting our sights high and working together, we can do extraordinary things. I hope you take pride in all you have accomplished. In the years ahead, may you continue to draw from your experience and work to improve lives of others.

Young people like you inspire me and strengthen my hope for the future. Michelle and I wish you all the best.

Sincerely,
Barack Obama
“I was really surprised to get a letter from the president,” Alex said during an impromptu interview/photo taking session at Knoxville Junior High School. “I couldn’t believe it.”

Eager to get back to class Thursday, Alec left by saying, “I’m just going to keep collecting food, whenever I can.”

Congratulations on a job well done, Alec. Keep up the great work.
(Reprinted with permission from the March 25 issue of the Galesburg Register-Mail).
Faith in action stories