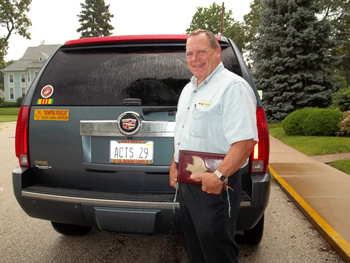 GENESEO -- Look in the Bible and find 28 chapters in the Book of Acts.

But look at the license plate on the vehicle Geneseo resident Clarke Barnes drives, and find ''Acts 29."

A 29th chapter may not be in the Bible, but it has been a major part in the ''Bible of Life'' of this retired Marine colonel and in this retired circuit court judge's witnessing of his faith.

It has been a good conversation starter for Mr. Barnes when sharing his faith with others.

Some people have wondered if his license plate was referring to Acts 2:9, he said. Others just say they know there are not 29 chapters Acts because they've looked in the Bible.''

He also remembers once finding a note on his windshield asking for an explanation.

Although Acts does not contain 29 chapters, ''we as Christians are given the mission of spreading the Gospel just as the apostles did in the Book of Acts … so you are writing Chapter 29,'' Mr. Barnes said.

''You are writing a gospel, a chapter each day by the things you do and the words that you say,'' he said, reciting a poem he uses to illustrate his point. ''People read what you write, whether faithless or true, so what is the Gospel according to you?''

''For God so loved the world that He gave His only Son, that whoever believes in Him should not perish but have eternal life,'' it reads.

''That is God's promise and it motivates me as it should motivate others,'' he said.

Yet his ''Acts 29'' license plate will continue to serve ''as a reminder that we must love others as God loves us."

It not only works well out on the road, but he's referred to it in adult Sunday school classes he's taught at Grace United Methodist Church in Geneseo.

He's never driving or witnessing about his faith without a license that way.

(Reprinted with permission from the June 24 issue of Moline Dispatch. Clarke Barnes is a lay member to annual conference at Geneseo Grace UMC.)