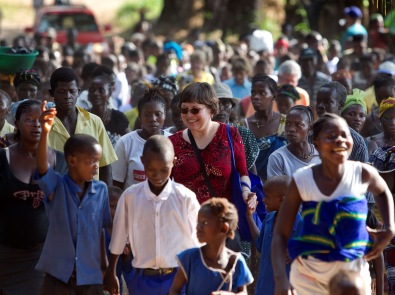 When John heard in prison what the Messiah was doing, he sent word by his disciples and said to him, “Are you the one who is to come, or are we to wait for another?” Jesus answered them, “ Go and tell John what you hear and see: the blind receive their sight, the lame walk, the lepers are cleansed, the deaf hear, the dead are raised, and the poor have good news brought to them. And blessed is anyone who takes no offense at me.” (Matthew 11:2-6, NRSV)

This portion of the lectionary Gospel lesson for the 3rd Sunday in Advent (Year A) contains a question from John the Baptist to Jesus. John has already proclaimed the Jesus as the Messiah, and yet it appears he now has some questions, perhaps some doubt. So he sends his messengers to inquire. Jesus’ reply instructs them to report back to John “what (they) hear and see.”  Through their descriptions of what they had experienced, John would know the reality of the Christ – Emmanuel, God-with-Us.
I knew of the responsibility I bore as I accepted the invitation to be a part of the delegation which would be traveling to Sierra Leone to observe one of the first major distributions of mosquito nets made possible by the Imagine No Malaria initiative. I fully understood that when I arrived home the people of IGRC would be listening for confirmation that Jesus was in the midst of this endeavor.
How am I to capture the fullness of God’s presence and work in Sierra Leone? That’s the question. I am choosing to follow the instructions of Jesus to John’s messengers by telling you a bit of what I heard and saw…
I heard the cry of a tiny infant – a beautiful baby girl in the arms of her young mother … and wondered if this little one would be among the 1 in 5 children who don’t survive to the age of five.
I saw a woman hanging a mosquito net … and observed that the bed on which she slept was a tattered grey mattress on the concrete floor of her bedroom.
I heard the enthusiastic singing and felt the touch of the children’s dirty hands in mine as we were surrounded by the throng who greeted us at the village gates and processed with us to the courtyard where we gathered for a formal service of thanksgiving.
I saw the sincerity in the face of a thin elderly woman who stepped up to greet me after the ceremony…she bowed slightly and began gesturing gently while speaking quietly in her native tongue. I felt the warmth of the Spirit flow through me. One of the tribal leaders leaned over and whispered that she was saying a traditional blessing over me and those whom I represented.
I heard the impromptu serenade of the group of women during our walk through another village – a musical expression of praise and thanksgiving for the gift of life and hope brought by the nets now hanging in their homes.
I saw the pride on the faces of the tribal representatives who had been recruited and trained as volunteers to work on this net distribution. Their role would include visiting from house-to-house to assist with hanging the nets, instructing the residents in their proper use, and returning every quarter for one year to verify that the nets are being used and share other health-related information.
I heard the story of Henrietta – a native of Sierra Leone who was instrumental in the recruitment and training process. She had taken on the job somewhat reluctantly unsure of her ability, but over the months she had been transformed into a capable and confident leader with a passion to continue the work of improving the quality of life in her country.
I saw the graph and corresponding chart on the wall which recorded the number of deaths in the village served by this UMC Health Clinic. The number of deaths caused by malaria ranked highest in many months of the year.
I heard the passion for the Imagine No Malaria initiative in the voice of the doctor who has been instrumental in the improvement of public health in his country for several decades.
I saw Christians and Muslims working in unity for the sake of saving lives.
I heard the testimony of the representative of UNICEF who affirmed the effectiveness of the partnership of the various health agencies in this initiative.
I saw photos of the mosquito net distribution on the laptop of the person sitting next to me on the plane. She explained that she was not associated with Imagine No Malaria nor the United Methodist Church, but was there visiting other projects being funded by a private endowment based in Europe. She had happened onto the net distribution in one of the villages and had learned the story of what was happening from the villagers.
In the words of this stranger from Europe, I heard confirmation of the presence of the Risen Christ and knew that the efforts of the volunteers and INM staff were bearing fruit. In the faces so many of the people I met, I saw reflected the face of Christ. The people of Sierra Leone are not only being transformed, but they are becoming agents of transformation for the cause of saving lives.
May we trust that this same transformative power of the Holy Spirit will work among us as we engage the Imagine No Malaria initiative and partner with our brothers and sisters in Africa in this world-changing ministry.
Blogs