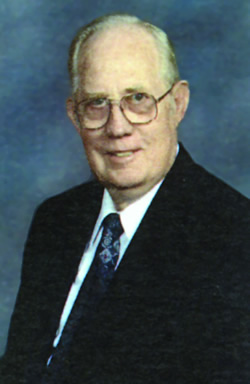 I could not escape noticing the irony of Oct. 28.

While I was speaking at the Chapel service of Kankakee Asbury UMC, my cell phone began vibrating. My wife, a few minutes later, left the service, and so when I finished and sat down, I glanced and saw I had a call from my mother. Knowing that both my parents are advanced in age, I was concerned but knew I would need to finish the service.
When I came to the back of the chapel with the church’s pastor, Steve Goodin, my wife told me that my mother was calling to tell me that my Uncle Earl had passed away after a battle with cancer. It was my third uncle on my father’s side that had died in the past four years.
My Uncle Earl and my father, Eugene Black, served as clergy members in the former Southern Illinois Conference. They roomed together at annual conference and retired with a combined total of 92 years of ministry between them in 1995. While my father usually had a low profile, his younger brother was never shy about confronting what he believed to be wrong or unfair. At his core, Earl believed that the only way to bring healing was to confront the problem.
Where the day’s irony came was that later that afternoon, my cellphone vibrated once more with the news that the Judicial Council had struck down the General Conference’s action of removing the security of appointment for elders in the church. The General Conference had created a new process which many, myself included, thought would provide more grace and more clarity than our current complaint process allowed.
I also believe that the marriage of security of appointment with itineracy, as ruled by the Judicial Council was in error, considering that itineracy was part of a system dating back to 1784. Security of appointment did not occur until 1956. And the action seemed to grant a constitutional right to something not specifically mentioned in the church’s Constitution, meaning that changes are very difficult to make. I would point out that the 1956 General Conference took a specific action that also changed the nature of itineracy but it was never struck down.
Two weeks later – again on a Sunday – the Judicial Council met in special session and reinstated Bishop W. Earl Bledsoe to active status after the South Central Jurisdictional Committee on Episcopacy cited “numerous errors in fair process” when the committee moved Bledsoe to involuntary retirement. ‘
Looking at the two cases together, the Judicial Council is saying, “there is a process in place,” and bodies of the church are not able to innovate their own solutions to problems that don’t quite fit. The complaint process is available as a remedy. Use it.
For nearly 35 years, Uncle Earl committed himself to a ministry of fair process. When pastors had complaints filed against them, Earl served as an advocate. During his lifetime, he represented 30 pastors throughout the United States and served as counsel in a church trial within Southern Illinois.
He believed that the process was well-served and justice prevailed when there is both an aggressive prosecution and an equally aggressive defense in a proceeding.
And while some could not understand Earl’s reasoning, – which cost him some friendships among colleagues  --  he remained committed to fair process. In a 1980 Judicial Council decision, Earl was referred to “unusually able and competent” in that he not only searched church law but secular cases and proceedings which may mirror circumstances in the case he was handling.
In that case, Earl had cited 10 alleged errors in a church trial. And while there was only one that was sustained by the Judicial Council – that two bishops, one of whom was the presiding officer, met with the members of the Trial Court during the time of their deliberations on the penalty phase without the knowledge or consent of the defendant or defense counsel – it was sufficient to order a new trial because the deliberative process was prejudiced.
Several years later, when Bishop Leroy Hodapp moved on to serve in Indiana, he told a pastor who was facing a chargeable offense and asked what his options were, “Go see Earl Black in southern Illinois. You are entitled to a vigorous defense.” Bishop Hodapp, one of the two bishops stung by the earlier decision, also realized the need for fair process.
During my tenure as Assistant to the Bishop, Earl respected me and would never try to get information about a matter to which he was counseling and neither would I ask him about his work as a way to get “inside information” that would benefit the Bishop or the church’s position.
This month is my 15th anniversary of working for the Illinois Great Rivers Conference. On several occasions, the conference has sponsored training for “counsels of the church” – those who serve as prosecutors of the church’s case against a pastor. However, I have never heard a similar concern for training those who might advocate for the pastor who has been charged. Many times, those who face charges bring spiritual support but do not equip themselves for the legal and judicial processes of the church.
I think the greatest legacy of Earl’s life might be his passion for seeing that everyone gets a fair shake. Judge Jon Gray of Kansas City, Mo., who served on the Judicial Council from 2004 to 2012, has made this part of his ministry in retirement and was the counsel for Bishop Bledsoe before the Judicial Council. But if a system is to be truly fair, we need other advocates that can fill Earl’s shoes.
And the church will be better served for it.
Blogs