What happens to a dream deferred?

Or does it explode?

Today's visit to Africa University and to Old Mutare Mission Station was dreamy.  Not in the usual sense. But dreams were very much a part of today's trip. For some, it was dreams being fulfilled; for others, too young to articulate their dreams, it was a dream deferred. But both have been met with extravagant generosity.

Today was the day I was given a chance to interview two of six students the IGRC are currently providing with scholarships to Africa University. As I visited with these two young men, I saw a glimpse of the answer to the question I posed yesterday, "What would it take to see a seismic shift in Africa?"

Melvin Nye Payekar of Liberia and Ivan Milosi of the Democratic Republic of the Congo are recipients of two graduate study scholarships where one of the recipients is from Liberia and the other from another African nation. Both biographies have similarities and both are seeing their dreams for an education met through the generosity of offerings within the IGRC.

Both are students in Africa University's Institute of Peace, Leadership and Governance, the newest of Faculties (Schools) at Africa University, which seek to train students to return to their country and assist in ways to bring about peace and reconciliation. 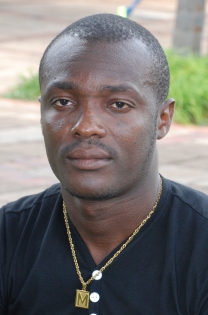 Payekar received a bachelor's degree in accounting at the University of Liberia in Monrovia and was a candidate for a master's degree in business administration when he wasn't able to continue his studies due to the death of his father. His father was a lab technician at Ganta Hospital for 30 years before his sudden death. With finances being an issue, Payekar found the PLG program at Africa University and a new dream was kindled.

"I feel Liberia will need us to carry some sort of leadership into the future by participating in our government," he said. "My education is providing ways in whcih we can go about building a society free of war and violence."

The third of seven children, Payekar said his mother farms to provide a standard of living for his family and that he has attained the highest level of education among his siblings.

"Coming to Africa University was a privilege and I am honored that your conference identified me for a scholarship," he said. "I want to extend my thanks and appreciation."

Milosi is the son of a United Methodist pastor and finances were an issue for him as well. After graduating from Africa University in June 2010 with a Bachelor's of Divinity degree, he had to return home because he couldn't afford to continue his post-graduate education.

Returning to the Congo, Milosi began working with youth -- not in a church setting -- but in society and in the communities where the youth live. "We had gone through long periods of war," Milosi said. "Helping youth to live, to build peace and to accept one another is a way of ministering to one another." 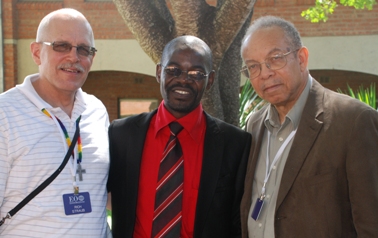 Milosi believes that the youth can provide a witness to other generations. "It is a way in which we can say, 'there's another way besides war and there's a way of dealing with our differences that separate us from one another," he said.

Africa University was the place of transformation for Milosi that gave birth to his dream. "When I came here, I had another view of the world, knowing that we as Congolese were at war with all these countries. My mind was transformed when I had to share a room with someone from Burundi and someone from Uganda. And through living that transformation, we can transform others."

Milosi believes the IGRC is a vital partner is this dream. "Without what the IGRC is doing, we would never be able to say, 'the dream is alive,'" he said. "There are millions of young people in Africa with dreams; they just don't have the resources to fulfill them. So I really appreciate the work of your conference as you help us fulfill those dreams."

While dreams were being fulfilled, we were also made painfully aware of dreams deferred when we met the 80 children of the Fairfield Children's Home located at Old Mutare Mission Station.  The Mission Station, the first in Africa, was established by Bishop Joseph Hartzell. In 1903, Fairfield Children's Home was founded and was located for the first 100 years at the Old Mutare Hospital.

Luke Matanya, who supervises the orphanage, said in 2003, the facility moved to the Mission Station and the children were put into family settings as opposed to dormitory living. The Mission Station also has a primary school and a secondary school which provide education to the Fairfield children as well as others.

Eight family units -- comprised of a mother and four assistants -- take care of up to 10 children.  The children have either been abandoned and "dumped" with authorities or the children have no living parents, due in large part to HIV/AIDS. In all, 90 percent have no relatives.

Major funding for the facility which houses children up to age 18 comes from the General Board of Global Ministries as a General Advance Special and from the Fairfield Outreach and Sponsors Association (FOSA). 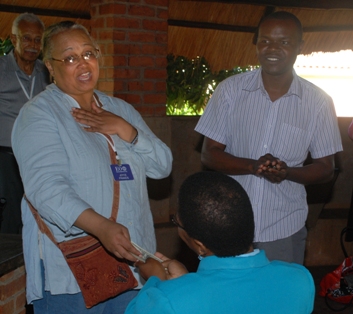 As I listened to Luke's presentation to our group, I kept thinking that Fairfield Children's Home could easily be nestled in the Illinois Great Rivers Conference as the national government has reneged on its support for the children since 2011. Prior to this time, the government provided $15 per child per month in the way of assistance, meaning the ministry has to rely on its partnership with GBGM and FOSA. It is a challenge faced by our own Baby Fold, Cunningham Home, the United Methodist Children's Home, Lessie Bates Davis Neighborhood House and Chaddock as the State of Illinois pays only a fraction of what it owes social service agencies if it pays any amount -- and usually several months late.

Luke said the Children's Home aim is to find parents that are willing to adopt. When Bishop Jonathan Keaton asked about ways of being in support and was able to confirm they could receive donations from the group, someone said, "Looks like you got an offering, Bishop." At the group's urging to give, Bishop Keaton took off his cap and served as the group's usher. After an intial collection yielded $355, someone said, "let's make it an even $400." A second round of giving commenced with another $195 for a total of $550.

Joyce Francis, who counted the offering, announced the totals, and Natalia, the Mission Chaplain fell to her knees as the funds were presented to her. What we didn't know until later was that the Children's Home cupboards were bare. The monthly allotment of 10 bars of soap per household had been cut to just three bars this month in order to have some money to purchase food for the children. The $550 came at an opportune time for this ministry. 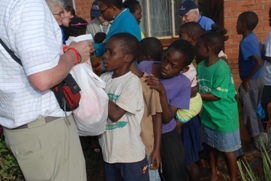 For the next 30 minutes, the children, after an initial sizing up of the group, came from all directions as several group members handed out items ranging from pencils, erasers, crayons, bracelets and the ever popular Dum Dum suckers.