By Andy Adams
Wednesday at General Conference was something, let me tell you. We began with a powerful sermon from Bishop James Swanson Jr. Then we received the following “way forward” from the Council of Bishops. This was a non-binding recommendation that the General Conference body could act on or not. Here is the content of that recommended “way forward.” 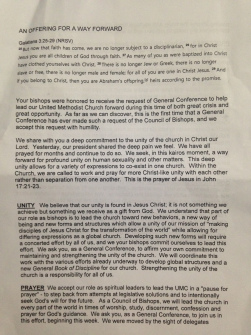 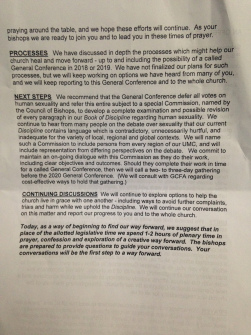 After receiving this, we took a break. Upon returning from the break, Adam Hamilton (a large church pastor and proponent of “a third way” – refer to my definitions in a previous post) proposed legislation that would act on the bishop’s recommendations. After much debate and attempted amendments, AND a lunch break, the body voted it down by about 40 votes. In between our presiding chair was accused of undermining the entire process and was overwhelmingly supported by his colleagues and the body. It was an act of tremendous disrespect.

So, the Hamilton motion was defeated. After some moments of awkward silence and pleas (but no motion) from a two African delegates to move on with the business of the General Conference, another delegate asked us to receive the bishop’s recommendations and act on them (essentially the same as the Hamilton proposal). After some debate, this vote passed by about 30 votes.

If we finish General Conference without reconsidering this motion, I am concerned that it essentially gives the bishops and their appointed special commission a “blank check.” If you read the bishop’s recommendation closely, you see that it has very few specifics and therefore opens the Commission to bring forward whatever it pleases. I’m concerned about this because I expect the Commission to bring something very similar to what the General Agencies and Adam Hamilton have already brought to THIS General Conference to be dealt with. Those petitions were defeated in committee and would likely have been defeated by the body if they would be discussed. As it is we kicked the can down the road, will likely spend a lot of money to meet again in 2-3 years, and have to do it all again then. On the positive note, we don’t have to do the painful deliberating about human sexuality at this General Conference even though we were elected to do so. And yet my hope is not in the bishops or this commission, but in Jesus, and his Holy Spirit can do anything. Thus, I have peace.

Not to be shortchanged, at the end our our day The United Methodist Church acknowledged the horrific acts and pain caused by former members at the Sandy Creek Massacre on November 29, 1864 and repented of our institutional sin that followed.