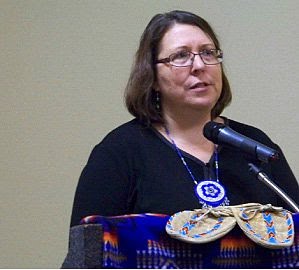 It was an honor to represent the United Methodist Commission on Christian Unity and Interreligious Concerns at the April 28 memorial dedication of the Sand Creek Massacre National Historic Site near Chivington, Colo.

Chivington is a small, dusty town that has no retail businesses whatsoever and only a few sand-beaten dwellings. This town is named for Col. John Chivington, who led the 1864 massacre of Cheyenne and Arapaho innocents.

It is because of Chivington that I, a United Methodist, found myself in this remote territory. A strange tie binds me to Chivington and the 200 who died at Sand Creek.

My tie to Chivington is that we are both Methodists and both preachers. I am left with questions: By what set of circumstances did this Methodist Episcopal pastor give up his Christian ministry and choose a path of violence - not a battle, but a vigilante massacre? And what happens to a man's spirit that he looks upon the perfect little faces of Indian children and says, "Nits make lice," ordering his men to kill them all?

I am not sure, but I am reminded that sin abides in us all, and evil can and will assert itself even through the very vessels which hold the souls of Christians.

My personal connection to the Massacre of 1864 is that I am Native American as well as a Methodist. My knowledge of the massacre dates back to my teen years, when our pastor showed the movie "Soldier Blue" to our youth fellowship group. The graphic images of that film have stayed with me over 35 years.

Another connection is that I had a friend, Dee Wright, a Pawnee Indian who was one of the last living members of the Pawnee Bill Wild West. I remember him telling me about a good friend of his who had escaped the Sand Creek Massacre at the age of 7. Dee said this friend had hidden in the creek, breathing through a reed for a day and night before daring to move. You don't forget images like these.

The singers, with steady drumbeat, sang old songs, including the actual death song of White Antelope, which he sang while lying at the edge of Sand Creek. It is still remembered in this most sacred oral tradition.

About 2,000 persons attended the ceremonials, which lasted from early morning until dark. In the evening, we were honored by descendants who danced gourd dances and round dances.

Darrell Flyingman, governor of the Southern Arapaho and Southern Cheyenne tribes, described the days of encampment and ceremonies by noting that "we were welcomed by our ancestors and our relatives." U.S. Sen. Sam Brownback, R-Kan., brought the words "I apologize deeply. Forgive us."

It has become clear that words are not enough. At the 1996 United Methodist General Conference in Denver, a resolution was adopted to support government restitutions to the Cheyenne and Arapaho Tribes for wrongs against humanity, but the statement offered only words from our church. A new resolution is being brought to the 2008 General Conference seeking financial support for this national historic site.

As a nation, we have come to this good day when we do acknowledge and remember what happened at Sand Creek. A monument will be built at the site, and perhaps of equal importance, a research center is being established in the nearby town of Eads, dedicated to not only this particular event, but also to the study of genocide. The park service is providing matching funds for donations to the project.

We envision Indians and non-Indians coming to the site to remember what happened at Sand Creek. We envision scholars and students, pastors and church folk coming to learn the truth of history and to continue raising the important questions lest we repeat the sins of our forebears. It is time for more than words.

(Rev. Carol Lakota Eastin is an IGRC clergy member currently serving as conference superintendent assigned to the Kaskaskia River District. This reflection piece was originally published by the United Methodist News Service on May 7, 2007. It is reprinted with the permission of the author)