The Greatest of These is Love

Love was in the air all Valentine's Day in Israel for those traveling with Bishop Jonathan Keaton on a Holy Land pilgrimage.

Seven couples on the trip -- David Blackburn and Allynn Walker of Columbia; Jack and Yvonne Hall of Danvers; Andy and Lois Maxwell of Hoopeston; Frank and Anita Munden of Gilman; Roosevelt and Gifty Smith of Flora; Mike and Nancy Sowers of Greenup and Gary and Muriel Wilson of Fairview Heights all renewed their wedding vows at the site where Jesus performed his first miracle of turning water into wine in Cana of Galilee.

Bishop Keaton performed the ceremony in the church's chapel -- an edifice built in the 19th century over the ruins of the grotto of the synagogue where Jesus, his disciples and mother Mary attended a wedding.

And while the service was inspiring, for those of us with spouses at home or one who has lost her spouse in the past year, the moment was bittersweet for we were not able to voice those vows to our loved ones on this special occasion. I found myself saying those vows with the couples as if to renew my commitment to my wife, Carolyn, who has been my partner in life and ministry for nearly 25 years. There's something about knowing that you would have no doubts about doing it all over again and that the covenant made a quarter century ago has continued to be a blessing. 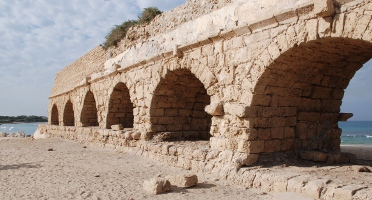 The interesting part of today is this -- most of the day was spent looking at how the things we often value and to which we invest our lives lies in ruins. We began by seeing the Roman aqueduct just outside the ancient city of Caesarea.  Remnants still stand but it is a shell of what was begun by King Herod the Great to supply a steady flow of running water for this city along the Mediterranean Sea. 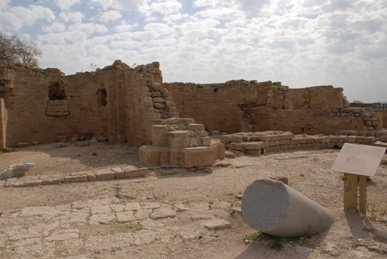 When we visited Caesarea, we viewed how the city which was a Phoenician city that is geographically centered between Africa, Asia and Europe, had great prominence due to the building of a great city under Herod, only to be captured by Arab invaders, re-emerge during the Crusades, only to be left in shambles and blocks and building materials transported to other areas for construction.

The same story emerged as we visited Megiddo, which was built and destroyed 25 times, including being destroyed by King David, only to have it rebuilt under his son, King Solomon. 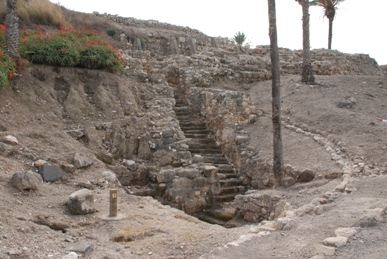 But even Solomon, at the end of his days, in the book of Ecclesiastes, wrote, "this is the end of the matter; all has been heard. Worship God and keep God's commandments because this what everyone must do"(Ecclesiastes 12:13). His building of monuments to himself and his pursuit of knowledge, while laudable, left him without satisfaction. 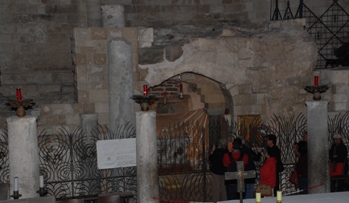 At the Church of the Anunciation, a Catholic church beautifully designed by Giavonni Muzio, stands next to the Greek Orthodox Church of the Anunciation. The current church, built in 1969, is built over the site of the earlier churches from the Byzantine era and the Crusader era. On the lower level is the grotto, believed by many Christians to be Mary's childhood home. Greek Orthodox adherents believe that Mary received word from the angel Gabriel about the birth of Christ while drawing water and so the adjacent church is situated over a spring where Mary would have drawn water as a girl. 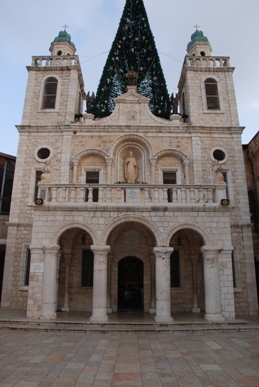 And then at Cana, an 1879 church was built by the Franciscans over the ruins of previous buildings. One of the things that emboldened the Franciscans to believe this to be the site of the marriage as the discovery of a basilica dating back to the first century with three apses in a cross-like form and a small stone cistern found in a crypt and fitted into a flagstone floor.

Today's events seemed to be building whose crescendo was the renewal of seven covenants with the reminder of what is lasting and what may lie in ruins. Solomon was right. Covenant with God is paramount and such a message is echoed by the Apostle Paul in First Corinthians 13 -- a text often quoted in covenant marriage ceremonies:

That was true for seven couples who renewed the marriage vows on Friday at Cana of Galilee. But it was a realization that also was owned by a community of 34 people -- some with spouses and others not -- that love will endure when stone block, mortar and human frailty fail.

Here are the seven couples renewing their vows. To view a larger format of the photo or to download and save, click on the small image and the larger image will appear: 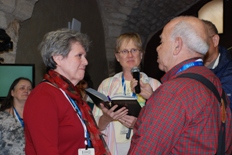 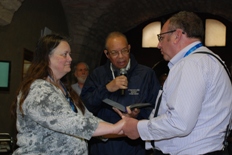 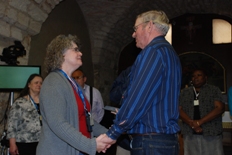 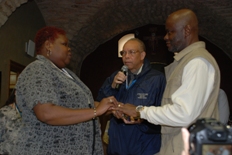 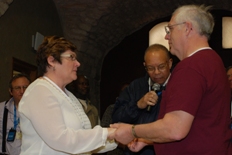 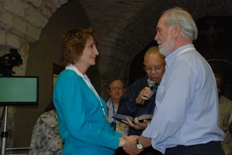 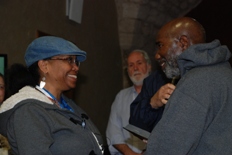