Sunday's journeys in the Holy Land took us to the storied historic site of Masada as well as a chance to set our feet in the third body of water, the Dead Sea. As the group has built more common experiences together, it is obvious Christian community is being formed.

Bishop Jonathan Keaton, in speaking of the importance of these trips said that bringing newly-ordained pastors is one way in which an early experience of Christian community can have a dramatic impact on what happens in the ensuing years.

In many ways, Sunday's visited sites stood in stark contrast to a life where one is part of a larger community bigger than themselves.

Masada was a fortress built on a plateau near the southwestern coast of the Dead Sea. According to the Jewish historian Josephus Flavius, it was founded by an Hasmonean king of Judea in the late second century B.C., although there are connections with King Solomon even earlier. It was later fortified by King Herod the Great, who built a palace at one end of the plateau as a place in which to separate himself from trouble in Jerusalem and there is no doubt Herod's tenure had plenty of trouble, but it was also marked by major building projects funded through the treasury of the Roman empire.

Later, in 68 A.D., the Jews revolted against Rome. During the uprising, half of the Roman army was sent to Palestine to put down the insurrection, while the other half was distributed across the vast empire. A group of Jewish rebels, who had settled on the plateau, put up a valiant effort. The entire group numbered 963, according to Josephus, but the number of actual men capable of doing battle numbered 120. The remainder were women, children and the aged. Rome besieged Masada with 10,000 troops and created a battering ram to topple the fortified wall to the city.

In fighting that was reminiscent to the Texans at the Alamo fighting against the Mexican armies led by Santa Ana, Josephus chronicles the battle in which the outnumbered Jews fought valiantly, but eventually realized they could not win the battle. Faced with surrender to the Romans, which would almost guaranteed enslavement, the group of fighters chose to kill their families and then commit suicide, choosing freedom in death over slavery in life. When the Romans finally captured the city, only two women and five children remained in the city with everyone else dead. In more recent years, archaeologists have found the remains of the seven survivors who were more than likely executed by the Roman army.

Later on, a Byzantine community was established built on the ruins in the 5th and 6th centuries but then the community left and returned to Jerusalem.

Masada is a testament to human ingenuity. The fortress included storehouses, barracks, an armory, the palace, cisterns filled with rainwater and a plumbing system that was quite advanced and a water system that used aqueducts on multiple levels to make sure no one needed to go outside the walls of the city. The cliffs on the east edge of Masada are about 1,300 feet (400 m) high and the cliffs on the west are about 300 feet (91 m) high; the natural approaches to the cliff top are very difficult. The top of the plateau is a flat rhomboid, about 1,800 feet (550 m) by 900 feet (270 m). There was a casemate wall around the top of the plateau totaling 4,300 feet (1.3 km) long and 12 feet (3.7 m) high, with many towers. 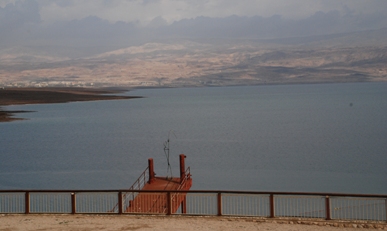 The Dead Sea also provided a wonderful metaphor of a fortressed life. It was one of the first health resorts for Herod the Great and King David used it as a place of refuge. However, the Dead Sea's surface and shores are at the lowest point on earth at 1,401 feet below sea level. It receives its water from the Jordan River, but does not have any outlet. The body of water, while known for its saltiness (almost 10 times saltier than the ocean) also possesses no life.

As the entire group is discovering, we are created for community. Humans are social beings that have been created for covenant with God and community with others. But in order to have community, there has to be an outlet in whichgrace and love flows.

For the new ordinands, a lone ranger pastor may be able to survive and even thrive for a while in ministry, but like Sunday's metaphors show, they eventually die. The truth also applies to laity as well.

One final note about the Dead Sea: In May 2009 at the World Economic Forum, Jordan announced its plans to construct the "Jordan National Red Sea Development Project" (JRSP), a plan to convey seawater from the Red Sea near Aqaba to the Dead Sea through a canal. Water would be desalinated along the route to provide fresh water to Jordan, with the brine discharge sent to the Dead Sea for replenishment. Water deliveries with this new system providing an outlet to the Dead Sea may begin as early as 2017. Israel has expressed its support and will likely benefit from some of the water delivery to its Negev region with shores and water levels expected to increase instead of recede.

Our travels continue Monday with a journey to Bethlehem to see the Church of the Nativity, Shepherd's Field, Bethlehem Bible College, the Garden of Gethsemane, Mount Zion, the House of Caiaphas and the Upper Room.