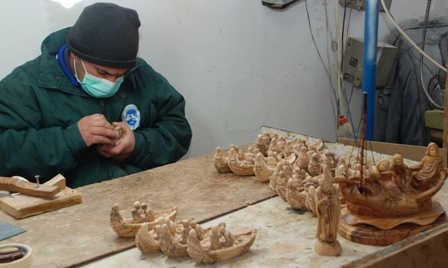 It is a story that would make for another Horatio Alger book. As you learned in American literature class, Alger was a 19th century author of dime novel stories for boys. He began writing these stories in the post-Civil War era, taking advantage of the urbanization of America and telling the stories of youth in the large urban centers that began as impoverished children and teens and through hard work, perseverance and moral fortitude, these youths rose from the throes of poverty to achieve some wealth and prosperity. "The rags to riches" genre was popular in 1870-1890's, as cities like New York, Philadelphia and Boston were in major transition due to industrialization.

A half a world away, a Turkish family emigrated to Bethlehem in the early 20th century. After many years of hard work, the family managed to set foot in the tourism industry. The Nissan family religion is Assyrian Orthodox and the faith still uses the ancient language spoken by Jesus, Abraham, Isaac and Jacob.

Today, the Nissan Brothers are in their fourth generation of business catering to visitors and pilgrims to Bethlehem. The IGRC group stopped by Monday morning and heard this family's story and the craftsmanship that goes into carving a variety of products from olive wood; and other items made of mother of pearl, silver and gold.

The big break came in the early 1940's when the four brothers obtained a license by the Ministry of Tourism to sell religious souvenirs to a ever-growing tourism audience. Finally, in the 1970's, the dream of renting a small shop on Manger Street was realized and as business grew so did the facilities, such that they own the largest tourism facility in the area. It includes:

As we toured the Olive Wood Factory, it was apparent that the craftsmanship was second to none.  The Nissan family member that spoke to us told us how in 1972, they begin scouring the community for the best artisans which had learned the trade from their families and the skills had been passed down from generation to generation.  But like the sign that said, "We provide the finest products with quick turnaround at the lowest prices. Pick any two," the Nissan Brothers also realized there was a need for products that could fit any budget. 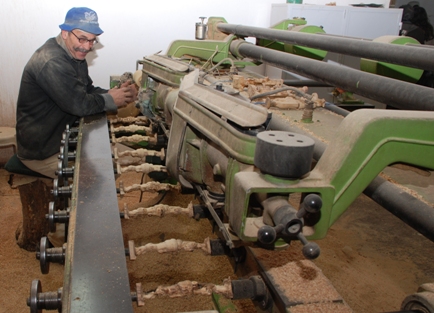 Some of the simpler items are down by copying the work and mass producing it. Other items in the store, priced at several hundred dollars reflects the time, effort and craftsmanship of a true artist at work.

In sending God's Son to the world in the form of Jesus, God provided a masterpiece that was just exactly what the world needed. The gift to the world was priceless, showing master craftsmanship with a desire to shape, in intricate detail, a relationship with humanity. And unlike the Nissan Brothers, there was no need to have cheaper products to fit smaller budgets because God's resources are infinite and the price is such that everyone could afford it.

God doesn't stop with Jesus. The masterpiece becomes the artisan and seeks to mold and shape us -- laity and clergy alike. Bill Gaither was right when he wrote, "All we have to offer is brokenness and strife and God makes something beautiful of our lives." 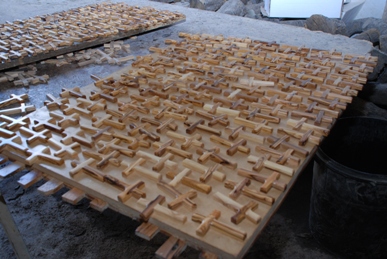 It amazes me that over the centuries, mankind has been trying to find a way to capture the masterpiece that is Jesus. Whether going to the Church of the Nativity, which was originally built by Constantine around 326 A.D. and rebuilt in the sixth century, to see the cave which is believed to be the site of the manger; or seeing the Shepherd's Field and the caves in which they lived, all of these events point to the masterpiece that is the life of Jesus Christ for humanity. In addition, the stories of David, and Ruth and Boaz play out in this tiny village, whose name means, "House of Bread."

But the masterpiece that is Jesus is also seen at Mount Zion, site of several locations of Jesus' Passion. One can view St. Peter in Gallicantu, a French Catholic Church, built on the ruins of the house of Caiaphas. Although the house is gone, the actual dungeon where Jesus was held the night before the Crucifixion can be viewed. Outside the palace is also where it is believed Peter denied that he knew Christ.

Mount Zion is also the site of the Cenacle (The Upper Room) and the "Tomb of David."  Both structures sit above the foundations of buildings dating back to the second century.

Inside the Cenacle, there are three doors -- one for the Holy Spirit, one from which Jesus came into the room to wash the feet of his disciples and a third, for Jesus' post-resurrection appearance when they were gathered in this, the first house church in Jerusalem.  The Tomb of David is actually a cenotaph or a monument to honor a person who is buried elsewhere has both the mix of styling from the Crusades period but the niche behind it was probably part of a Byzantine structure that preceded it from about the sixth century.

Regardless of the pedigree, God continues fashioning masterpieces each day from all of us "works-in-progress." Man's search for a way to capture the masterpiece is by allowing God to shape us as well. And if Mr. Alger were around, our stories might provide new material for his stories.