The challenges of co-existence

Kaskaskia River District Superintendent Cindy Jones shared a selection called A Pilgrim is Not a Tourist with those of us that comprised a list of differences between folks how take a pleasure trip and those that are on a pilgrimage.

On the last full day of our pilgrimage, we visited inside Old Jerusalem and this morning's visit to the Temple Mount along with a visit to the Holy Sepulchre Church provided three stories of coexistence among the various religions situated in Jerusalem.

The first story of coexistence is one that is currently in the news. The Temple Mount is controlled within the City of Jerusalem by Jordanian authorities. The Temple Mount is important to Jews and Christians because it is located on Mount Moriah where Abraham took Isaac for a sacrifice and the place where the Ark of the Covenant sat in the Temple. Two temples have been built on the site and Jews dream of the day when a third temple will be built. 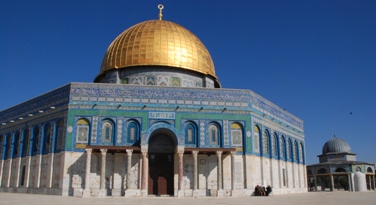 The Temple Mount and its plaza include the smaller El-Aksa Mosque (with the black dome) and the Dome of the Rock mosque with the golden dome. Under Moslem control, no Bibles or other religious materials are allowed into the plaza although it is open to the public. However, Moslems gather there and occupy the plaza each day for study and prayer.

The issue of coexistence came to a head this week. Although the mosque was formerly open to the public, the Muslim Waqf, the trust organization that cares for the mosque, closed it in 2000 to everyone except Moslems. Recently, the Israeli government announced it was considering "imposing sovereignty" on the plaza to allow greater access.

On Monday, the Knesset, the Israeli legislative branch, began debating the proposal, drawing criticism from the Palestinian Authority, Hamas and from the Jordan government that such an action could provoke a response. 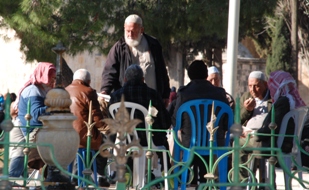 You could sense the tension when Jewish adherents entered the plaza area Tuesday as the Moslem groups would begin jeering them increasing in volume and intensity as group after group joined in.

Obviously, the jury is still out on whether coexistence is possible at the Temple Mount.

The Church of the Holy Sepulchre provided the other two stories. As we toured the structure, we learned that six ancient Christian denominations have shared the facility and its governance -- Roman Catholics and the five Eastern Orthodox faiths: Greek, Coptic (Egyptian), Armenian, Syrian and Ethiopian. During the early days following the reconstruction of the church in 1170, quarrels among the six faiths were frequent.

As a result, it was decided that the key to the church would be given to two Muslim families -- the Nusseibeh and Joudeh clans -- 800 years ago, with the responsibility of opening the church every morning handled by the Nusseibeh family at dawn and the Joudeh family locking it at dusk.  This tradition continues to this day and the key has been handed down from father to son. This plan has allowed each of the faiths to coexist. 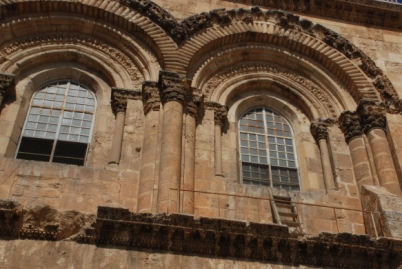 As we left the Church of the Holy Sepulchre, our guide, Munzer Adameh, pointed to a wooden ladder located above the facade, under the window of the church. Made of cedar wood, it was first mentioned in 1757 and has remained in the same location except for two brief periods. The ladder is considered immovable due to an understanding that no cleric of the six Christian orders may move, rearrange, or alter any property without unanimous consent.

Behind the windows, there are two areas -- one under the control of the Greek Orthodox Church and the other, by the Armenians. A wall separated the two and so the ladder was used by the two groups to move from one side of the wall to the other by climbing out the window, move the ladder and then climb up the ladder and go in the other window.

In 1964, Pope Paul VI issued an order that the ladder was to remain in place until such a time when the Catholic Church and the five Orthodox churches reach a state of ecumenism. And in order to prevent any more conflicts between the Greeks and the Armenians, the ladder is suspended in its place until there is full communion between these denominations.

While in Jerusalem, we also had an opportunity to hear from both Israelis and Palestinians about the peace process. Daily, Jews gather at the wailing wall praying for peace in the city. But as the three stories show, the quest for peace continues to be elusive and will probably only occur when leaders on all sides of the conflicts -- be they between governments, religious faiths or denominations -- decide that the cost and pain of the status quo (doing nothing) is greater than the cost and pain of reaching an agreement and then following through with the tenets of that agreement.
Blogs