A Place of Healing 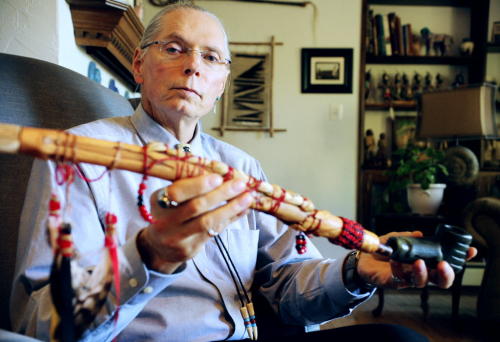 “Afterward, Jesus found him in the temple, and said to him, “See, you are well! Sin no more, that nothing worse befall you.”  the man went away and told the Jews that it was Jesus who had healed him.”

I was taught ceremonies of the Shawnee and Lenape people, one of which is the Sacred Pipe Ceremony (sometimes erroneously called ‘Peace Pipe’). There is a lot to learn in this ceremony including not only the concepts and words but also the significance of each action and placement of the articles.

To lead others in this sacred ‘sacrament’still makes me anxious. Early in my calling, I was asked by one of our Lenape Chiefs (sakima) to lead the Pipe Ceremony to bring about healing in a conflict among our Lenape people.

There over 40 people present and limited space to place all the articles since there was a heavy snow falling outside. I misplaced the Pipe on an ‘unclean’space and one of my Lenape warrior brothers noted this and became quite upset. He informed others. I was so embarrassed even though I had permission from the Chief to do so. The people were upset and any healing seemed far away. Humiliated by my friends, I deliberately left the circle and went outside to collect my thoughts. I blamed him and myself and was trying to find a way out of this obvious break in the ceremony and relationship. Shortly, my Lenape brother came outside, looking up at the falling snow.

He stood silently for while and said my name. I looked up and responded to him, “I am sorry. I have no more excuses or logic for what I did. I have betrayed a trust of you, my teachers and the people. Please forgive me.”My Lenape brother, all six feet five inches of him moved toward me, held out his arms and we hugged. “You are forgiven my brother. And do not forget this day. Aho (Amen).

A burden was released from me. I was grateful for the courage of my friend. I felt the healing of his words that day and I tell this to others to remind them of how our actions often need forgiveness and the courage to accept not only forgiveness but not to do the sin again. Blessings (Onkuntewagen) and humility (temakelensu) to all.

(Rev. Ken Hayden is a retired United Methodist pastor living in the Illinois Great Rivers Conference. A member of the Shawnee, turtle clan, he belongs to the Eastern Delaware Nation and has utilized both Native American and Christian traditions to help hospital patients when he served in Pennsylvania as a chaplain.)