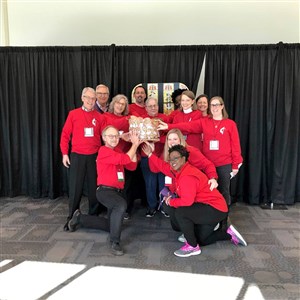 I chose not to post anything while at General Conference for the past four days, mostly because I needed space to process and wasn't sure that I could say anything helpful anyway. I'm not sure that has changed, but I do want to share one brief story that illustrates perfectly how I'm feeling this morning.

After the conference adjourned, the prayer team began the process of clearing all the prayer stations and the prayer room. I went down to the floor with Tom Albin and two other members of the team to retrieve the items from the prayer stations there. When we arrived at the doors to the floor, in the foyer space where the protest had taken place, security would not allow us in, saying they had no authority to allow anyone to enter the room. They also would not allow us back upstairs to the concourse level, for the same reason - they had no authority to do so. So we waited in a corner as those gathered in the foyer continued to sing and witness to their faith and their truth.

Once the floor had mostly cleared, we were finally allowed in. We split up and began to work our way around the prayer stations on the sides of the room. When we were nearly finished, Tom approached the table where we were sorting the collected items carrying a rather battered box full of many things - Upper Room devotional guides, burlap squares, and more. I commented that the box had seen better days.

He responded, "I'm holding it together, but it's starting to come apart."

I laughed a rather ironic laugh and said, "Isn't that a metaphor for this entire experience?"

Without in any way diminishing the very real and personal pain felt by others, and while acknowledging my own privilege, as a conference staff person I often feel like I'm trying to hold things together - including members of committees who don't always agree with one another but who nevertheless work diligently together to equip spiritual leaders who make disciples. As a deacon specializing in discipleship and spiritual formation, I work to hold things together by creating spaces in which people with deeply held convictions which may not always mesh nicely can build trust and share honestly from their hearts. As a prayer team member at this General Conference, I prayed with people who had to sit and breathe for a few minutes because they were crying too hard to speak due to the harm that has been done to them.

A fellow prayer team member asked me yesterday how all of this affects me personally. I replied that I might not know until the dust settles, which is true on many levels. But for now, it affirms my call to create safe spaces where we can talk about the things that really matter - in small groups, with others who may see things differently, not with a desire to change the minds of others, but in the hope that we might begin to broaden our own perspectives to embrace the perspectives of others who are equally loved and gifted by God, equally people of sacred worth, and equally devoted to love of God and love of neighbor.
If I can provide that safe space for you, or help your church create such spaces, it would be an honor and a privilege.