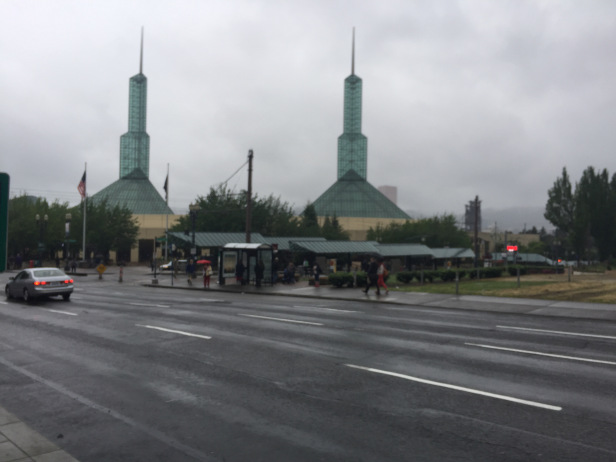 The two glass spires rising into the haze above the convention center call to mind the architecture of a church.  How fitting.  Just as appropriate is the fact that there are two and they are both surrounded by gloom.

As an exhausting Day Five of the 2016 General Conference of the United Methodist Church has closed, the work of the legislative committees is now done.  Once every four years we open our Book of Discipline for amendment.  We now have the legislation approved that will begin to come forth Monday for plenary debate.

I am supposed to be happy.  My steeple seems at the moment to be  winning.  We voted in my committee to retain our current stance on homosexuality by keeping the same list of offenses for which a pastor can be brought up on charges.  We tightened loopholes that allow violations of the Discipline to be swept under the rug.  We even passed new accountability measures for bishops.

I feel no joy even though we accomplished much of what those of us under our particular steeple felt we must do in order to restore integrity. The fact that we are playing a zero sum game was obvious as I spoke with several from the other side.  They are deflated.  Their steeple could only gain by taking something from mine and that didn’t happen today.  But the game is far from over.  If they stage a coup, my steeple could still lose.

It is strange how winning feels a lot like losing.  Someone once said the greater the trust and love, the fewer the rules are needed.  We found ourselves needing many more rules today.  I would hesitate to venture a guess on the word count in the legislation we proposed.  It was significant.  We may very well come out of Portland with this new set tools to enforce our rules upon the unwilling.  But these are no joy to use.  I would rather we could beat our swords into plough shares and craft words of higher purpose.

I love the folks under the other steeple.  They are, very often, sweet enough to give you a toothache.  They are passionate and sincere.  When they give a good speech representing their views, as they did many times today, I wanted to applaud.  We simply have an opposing list of non-negotiables.  If  one steeple rises, it diminishes the capacity of those under the other to do the work they feel called by God to do.

Perhaps the most contentious word in our Discipline is “incompatible.”  We state that the practice of homosexuality is incompatible with Christian teaching.  This word runs much deeper than a stance on sexuality, however.  There seems today to be a renewed appreciation for the fact that we really, in spite of sizeable points of overlap and significant shared history, have two incompatible views of the life of faith. If it was a marriage we might call them irreconcilable differences.

Almost by accident, I wound up on a conference call a couple years ago sponsored by one of our renewal groups.  We 80 “pastors and theologians” decided on that call to warn the church of schism if things did not change.  I personally decided that if schism was coming, I should work as hard as I could to prevent it.  I wrote something called the “Jurisdictional Solution” that compartmentalized the institution based on ideology.  Further refinement led to improved but separate versions which I submitted to General Conference for consideration.

All my proposals were broken down into their 26 component parts based on the paragraphs of the Discipline they each would alter.  These incoherent chunks were then farmed out to the various legislative committees and, not surprisingly, rejected.  I personally voted against the one piece that landed in my committee as it made no sense without the other necessary parts.

My goal in writing legislation was to try everything I could to hold us together for the sake of Jesus’ prayer.  I realize that the unity Jesus asked the Father for was not some strained institutional loyalty.  But I love the United Methodist Church and don’t want to see it go down without fighting for it. I stand by my work in this regard.

There remains something I call “The Love Alike Plan“, a hybrid of some other proposals. I wrote it two weeks before General Conference when I discovered a new way to achieve a structural solution without amendments to our constitution.  It was entered late into the Conferences Legislative Commmittee and was not acted upon due to time.  With twenty signatures, it could be brought forth for consideration.

I am not going to press for this one remaining solution unless some of the elder statesmen and stateswomen under both steeples come together and decide to end this game and try to reach a comprehensive settlement.  It remains in the pipeline and available to the church.  Jesus is our Savior, not me, and I am very comfortable with that.

With that… Good night, Portland.  Tomorrow is Pentecost.  The Holy Spirit will not find us in one accord, but I hope and pray He shows up anyway.