There is no fear in love 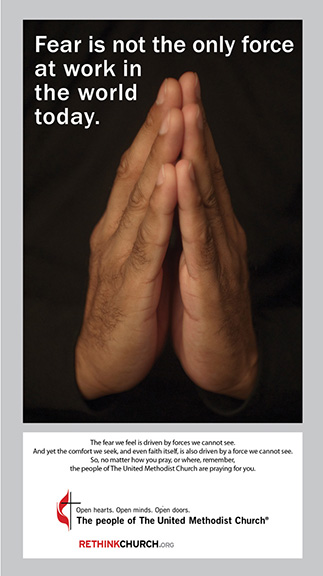 In the tragedy of 9/11, when airplanes were commandeered by terrorists and flown into the towers of the World Trade Center and the Pentagon, and a fourth was forced to crash into a field in Pennsylvania, the old certainties of security that we took for granted gave way.  Security was supplanted by fear about the new world we were entering into.

The fear was palpable. What might these people do next? What targets might they have in their sights? Who, exactly, are they, and why would they take innocent lives to achieve their ends?

And why on U.S. soil, a country that had never before seen such an act at this scale?

At the time, I was general secretary of United Methodist Communications and we had just begun the first national media campaign the church had undertaken. Our message was aspirational—the people called United Methodists are people with open hearts, open minds, and open doors.

I called a staff meeting within minutes of the first crash into the World Trade Center and we began to consider our messages in light of the unfolding tragedy. It was clear to us that the message of the church in this context required us to think deeply and carefully about how to proceed.

This conversation continued for weeks. In fact, it continued for years because we were involved in a global conversation with the world, not only about attitudes and fears in the U.S. but about a new understanding of reality around the globe.

The question that we often put foremost in our internal conversations was this: “What do we United Methodist Christians have to say to a fearful world?”

And the follow-up was: “What claims can we make that are rooted soundly in our faith, in our trust in God, and the teachings of Jesus?”

We were not producing an ad campaign so much as we were involved in the proclamation of our faith in a frightening and fearful time. We were doing theology while engaging in a public conversation with people around the world through media.

Fear robs us our of humanity. Nothing serves the forces of evil more than for us to forget who we are, people capable of compassion as well as justice. When this happens it’s easy for us to also forget that we who follow Jesus believe we are creatures of a loving God, born into a world of goodness and beauty given in love by our Creator.

And we risk forgetting that we are made whole by threads of many colors, cultures, and beliefs woven into a tapestry of common humanity.

In the hours after 9/11 our first thought was that we must call people to come together in prayer. Local churches across the land were opening their doors for interfaith prayer services. So we prepared a message that supported these efforts.

As the days passed, our message had to change to address the ongoing experience of new circumstances. Ground Zero, where so many lives were taken by violence, became one focal point for attention. So, too, did the memorial site in Pennsylvania. Both are sacred places.

It is the role of the church to remind us who we are, and for those who believe, whose we are.

In Hebrew scripture the Israelites hear repeatedly, even in bondage in Egypt, “do not be afraid.” The psalmist writes “even as I walk through the valley of the shadow of death I will fear no evil.” From the prophets and the voices of heavenly messengers come the words, “fear not.”

In Christian scriptures, Jesus, speaking to people under foreign occupation, often encourages them to not give in to fear. Paul, beaten and imprisoned, writes magnificently, “God did not give us a spirit that is fearful, but one that is powerful, loving and self-controlled.” (2 Timothy !:7)

Mary, an internally displaced, single, young virgin living in an occupied land is told she will soon give birth to a son named Jesus who will be called the Son of the Most High. And the messenger says incredulously, “Do not be afraid!”

At the root of Christian faith is the confidence that in God’s world, we need not live in fear. And this does not come as smooth words of comfort in easy times. These words are delivered when people are up against it, when times are hard, and reasons to fear are, well, reasonable.

But we believe that regardless of the circumstances, love overcomes. It is the claim of this faith throughout the ages. “Fear not.” We are given a spirit that is “powerful, loving, and self-controlled.”

An opportunity came that would allow us to deliver a message that could be seen from Ground Zero. We put it on a forty-foot banner that hung from a corner building where millions pass by daily.

It was based on 1 John 4:18-19, “There is no fear in love, but perfect love drives out fear because fear expects punishment. The person who is afraid has not been made perfect in love. We love because God first loved us.”

Marilyn Kennedy, a visitor to Ground Zero from Connecticut, wrote in a letter to the New York Times, “A feeling of deep sadness permeated the neighborhood. Along with the sadness, though, there was hope. Standing across from Maiden Lane, we saw a sign several stories high on the building. It read, ‘Fear is Not the Only Force at Work in the World Today.’ The words were printed over large praying hands. It was a powerful message and quite inspiring…”

I came away from this experience believing that we can do theology in public. We can engage the public conversation for the common good. By listening carefully, speaking respectfully, acting lovingly and with self-control, our moral tradition of inclusiveness offers hope and assurance in troubled times.