published 8/30/2018
Living Faith UMC in Bowen has been the Charter Sponsor of BSA Troop 32 for many years. Ranking high on a list of proud moments has been the advancement of six Eagle Scouts from the same patrol.

published 11/27/2017
Aging demographics, along with multiple generations that haven’t re-filled the pews — an all-too-familiar tale, said pastor Jean Hembrough — have taken their toll on Brooklyn UMC. The retirement of another part-time pastor, the Rev. Nancy Wood, earlier in the summer, and a shrinking pool of pastors to dip from, made the congregation take a more serious look at closing, said Hembrough, who also is retiring next summer.

Showalter, Lee appointed to the Cabinet

published 2/13/2017
By Paul Black SPRINGFIELD -- Bishop Frank J. Beard has announced the appointment of Rev. Nic Showalter and Rev. Eunjoo "Angie" Lee as conference superintendents, effective July 1. "Both Rev. Showalter and Rev. Lee have the leadership gifts and graces that are respected and noted by their clergy peers," Beard said in making the announcement. "They also have strong connections with the laity that have served." Beard has appointed Showalter to the LaMoine River District, succeeding the Rev. C. ...

published 12/5/2016
Bishop Frank Beard stopped by Jensen Woods Camp during his visit to the LaMoine River District. The camp is one of two for sale by the Illinois Great Rivers Conference

published 11/4/2016
Bishop Frank J. Beard is asking that the Illinois Great Rivers Conference set aside the week of Jan. 22-28, 2017, as a Week of Prayer for the Way Forward Commission and its work.

published 11/1/2016
Online registration is now open for Covenant Keepers 2017 which will be Jan. 30-31 at the Holiday Inn and Convention Center in East Peoria.

Registration and more information can be found at: www.igrc.org/CK2017. Registration is $30 per person and includes a Monday noon luncheon.
The theme for this event is: CK2017: Keepers of the Covenant.

published 9/26/2016
It appears that another round of scam threatening letters is going around regarding employment posters. These letters look very "official" and threaten the church with dire consequences if you don't buy their posters. Churches are not exempt from posting requirements, but ALL the posters you need are available for FREE download from the Illinois Department of Labor.

published 9/26/2016
The general secretary of the General Council on Finance and Administration has sent out a follow-up letter in an attempt to clarify matters for local churches as it relates to insurance coverage.

published 9/26/2016
Clergy salary and benefits costs for 2017 have been posted on the IGRC webpage at www.igrc.org/numbersfor2016. These will be helpful to you as you prepare 2017 budgets and Charge Conference forms.

published 9/26/2016
General Board of Global Ministries missionary Jacques Umembudi will be itinerating in the Illinois Great Rivers Conference Oct. 24-Nov. 7.
Umembudi, program director of Wings of Caring aviation ministry in the Democratic Republic of the Congo, is supported by six IGRC churches and will be open to additional engagements while in the IGRC.

published 8/22/2016
Beardstown First UMC had an Open House for new church recently. The parsonage, which conforms to The Book of Discipline, was constructed utilizing local vendors who had opportunity to showcase their skills.

published 6/10/2016
The following churches were recognized as Five Star Churches for 2015. To become a Five Star church, follow the guidelines that are given in the 2016 Five Star Challenge booklet. Certificates are given at Annual Conference to all Five Star churches. If you have any questions, contact Bunny Wolfe.

published 10/29/2015
Construction crews are starting to erect structural steel on the new school at Chaddock. More than 15,000 cubic yards of dirt have been moved, 1,500 cubic yards of concrete poured and 4,000 tons of gravel laid. The plan is to have the building under roof before winter weather sets in so that work can start on the inside during the winter months. The project is still on its timeline for children to occupy the new school by the start of the 2016-17 school year. 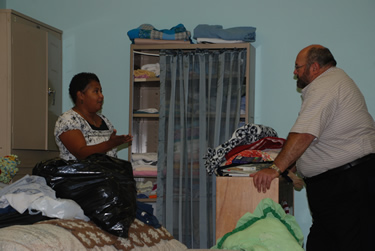 published 2/25/2011
Two superintendents are returning to familiar geographic territory while a third finds his assignment as being very compatible to his ministry, as Bishop Gregory V. Palmer has announced the appointment of three superintendents to the IGRC Cabinet, effective July 1. Revs. Leah Pogemiller, C. Douglas Rorex and Roger Russell will assume superintending responsibilities in the Vermilion, LaMoine and Cache River districts respectively. Pogemiller will succeed the Rev. J. Keith Zimmerman, who has ...
News