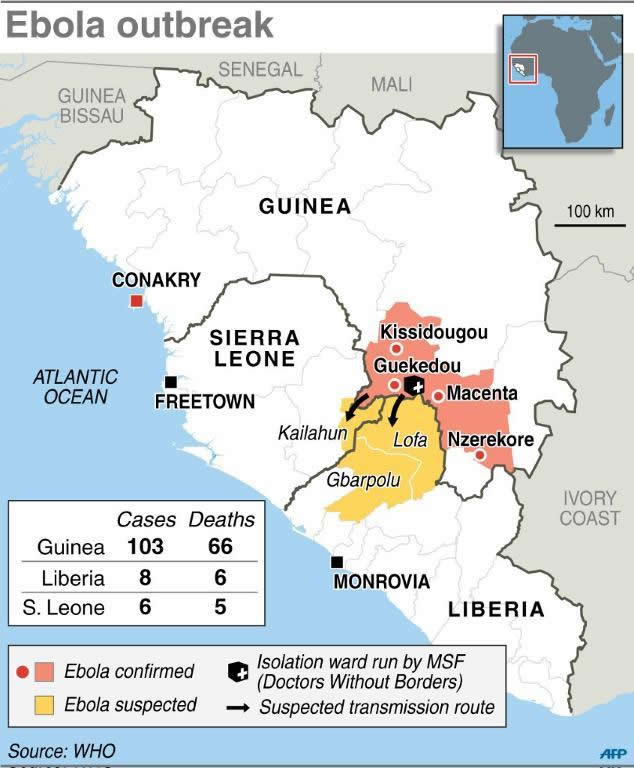 MONROVIA, Liberia – A suspected Ebola virus that began in neighboring Guinea has reached Liberia with two confirmed cases in an outbreak that has claimed a suspected 70 lives across west Africa and IGRC officials are monitoring the situation to assess whether a scheduled July mission trip is possible.

“I have been closely monitoring the Ebola breakout in Guinea and the news from Sierra Leone and Liberia,” said IGRC Coordinator of Missions and Outreach Bunny Wolfe. “This recent outbreak began in Guinea and surrounding countries are on high alert and are taking preventative measures. The government of Liberia is putting into place a three-month program to monitor all areas closer to the borders of Guinea, making public statements over the radio to advise people how to avoid contact with the virus and sending protective gear and advising on proper isolation of any suspected cases within Liberia.”

IGRC has a mission team scheduled to travel to Liberia in July.  Wolfe said It is not yet known if the July trip to Liberia will be cancelled. “All options are under consideration,” she said. “The World Health Organization is reporting as late as this morning that it does recommend yet any travel restrictions into Liberia nor is it recommending the closing of borders.  If this health risk continues to be present and if the Ebola breakout spreads into Liberia, it is likely that the IGRC July team will be cancelled. The outbreak in neighboring Guinea is being closely monitored and routine communication is happening with people within Liberia as well as daily watching news reports and updates through various international world news resources.”

Wolfe has been in contact with people “on the ground” in Liberia and also with the United Methodist Committee on Relief regarding the outbreak entering Liberia.  The most recent news reports a total of 111 cases in Guinea with 70 deaths in Guinea and possible spreading of the disease into the capital region of Conakry. As of March 31, the two confirmed cases of Ebola in Liberia were in the northernmost Lofa County near the border of Guinea.

Shannon Trilli, director of global health initiatives for the UMCOR, reported, “We have been in constant contact with Victor (Taryor) and the team in Ganta (and Diecke, Guinea).  We did receive a request for support for supplies, community-based outreach and communication and staff training.  I am working with Victor and Victoria to be a bit more precise in the plan, but I’d suggest partners give through the UMCOR Global Health Advance #3021770.

“There is a child from Guinea that had potential symptoms, who was tested over the weekend.  We are awaiting the results.  High-probable or suspected cases have been sent to Phebe, which has a better response unit.  GUMH are in total coordination with the government, and trying to implement protocols as they are directed from Monrovia.”

Wolfe contacted Martha Zeigler in Monrovia, who reported there were only two cases known that entered the country from Guinea into Lofa County, but there are no confirmed cases in other parts of the country.  She has asked IGRC to “intercede in prayer for Liberia that the virus will be contained”.  Zeigler reported that the government of Liberia is discouraging travel to Guinea and Sierra Leone for at least 21 days. The incubation period for the virus is 21 days.

Another Liberian partner from Monrovia, Rose Nah, reports “the Liberian Ministry of Health is sending teams to the Liberian borders with Guinea and the government is considering closing the border between the two countries, but as of today the border still remain open.”

Wolfe also heard from Priscilla Jaiah, Director of Ganta Mission Station March 31. “Two suspected patients were seen at Ganta Hospital and they were transferred on to Pheobe Hospital just south of Gbarnga. These cases were confirmed as NOT having Ebola.”  Jaiah said. “The border between Lofa County in Liberia and Guinea has been closed, but the border near Ganta remains open as of March 31.” People are being advised not to eat food from street vendors and to wash their hands often. Jaiah is in constant contact with Ganta Hospital personnel and will be reporting developments from Ganta. 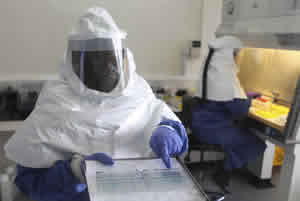 The WHO, on March 29, reported seven clinical samples, all from patients in the Foya District, Lofa County have been tested using an Ebola Zaire virus primers by the mobile laboratory of the Institut Pasteur (IP) Dakar in Conakry. Two of those samples have tested positive for the ebola. There have been two deaths among the suspected cases; a 35-year-old woman who died on March 21 tested positive for ebola virus while a male patient who died on March 27 tested negative.  Foya remains the only district in Liberia that has reported confirmed or suspected cases of Ebola.  As of March 26, Liberia had 27 contacts under medical follow-up.

The woman who died was married to a Guinean man and had just returned from a trip to that country, where she contracted the virus. The second person with a confirmed case of Ebola is the woman's sister. Liberia's Health Minister Walter Gwenigale told Al Jazeera that she is alive and quarantined, but refused to divulge more information "because we don't want to cause panic." According to Reuters, 11 deaths in Sierra Leone and Liberia are also suspected of having been caused by Ebola.

Officials suspect that the virus was transferred to people in Guinea via fruit bats, a delicacy in parts of the country. The consumption and sale of bats has since been made illegal.

Though WHO has said it "does not recommend that any travel or trade restrictions be applied to Liberia, Guinea or Sierra Leone based on the current information available for this event," Senegal has closed its border with Guinea as a preventative measure.

Ganta Hospital has launched a public awareness campaign to prevent residents from contacting the Ebola virus. Health workers from the hospital are now visiting schools, churches, business centers, and other work places teaching people what to avoid and what to report to the health centers. Ganta’s mayor has provided free airtime for medical personnel to appear on radio talk shows and educate Nimba County residents on preventative measures.

Liberia Conference Director of the Connectional Ministries, Rev. George D. Wilson, said the church through its hospitals is collaborating with the Liberian government to ensure that the Ebola virus does not overtake any sector of the country. The Episcopal Office of Bishop John Innis also expressed deep concern about the news of the Ebola virus.

Ebola hemorrhagic fever (also known as Ebola) is a contagious illness caused by an infection with the Ebola virus. It is often fatal in humans, monkeys, gorillas, and chimpanzees. The virus was first recognized in the Democratic Republic of the Congo (formerly Zaire) in 1976. No case of this illness in humans has ever been reported in the United States and this is also the first reported case in West Africa. There is no known cure; treatment usually consists of providing supportive care while the body fights the infection.