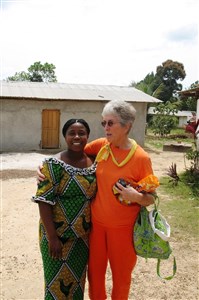 By Andy Bell-Baltaci
Monmouth Review Atlas
MONMOUTH — Before 2006, Miles, Iowa, native and current Monmouth resident Anita Anderson had no passport and had never been farther from home than Colorado.
She had been a teacher at the then-Warren, now-United School District for 40 years after graduating from the University of Dubuque. After retiring in 2002, she considered what she wanted to do with the rest of her days. At the top of that list was missionary trips. She went on four of them from 2006 to 2011, traveling to Romania, Liberia, New Orleans and Haiti. She says those trips have changed her life.
Anderson traveled to Romania through Buckner International, based out of Dallas. When there, she saw the level of need many of the children faced.
″(We were) giving shoes to orphans in Romania,” Anderson said. “We put shoes on children who had never had shoes or had cardboard in the soles of their shoes.”
According to Buckner’s website, “since 2000, Buckner’s Shoes for Orphan Souls drive has shipped almost 84,000 pairs of shoes to children in Romania.”
The trip inspired Anderson to continue mission work, this time with a local church, First United Methodist Church in Monmouth. With them she went to Liberia. To afford the trip, she came out of retirement for a semester to teach pre-K in Roseville.
The 2009 trip to Liberia came after 14 years of civil warfare in the country. Anderson says many of the residents there lived on $2.50 per day and could not afford to both eat and send their children to school, for which they needed to buy uniforms.
“Liberia had once been a thriving county, now everywhere there was devastation left from the war,” Anderson said. ”(There was) still no infrastructure. One of our dorm-like houses had no electricity and no running water, so we got used to a dip and pour shower, using the remainder of the water that was left in our bucket to flush the toilet. ... Wherever we went, we met many who had overcome these devastating conditions. They each had their own story; they showed us their love; they reflected the true love of Jesus.”
In Liberia, Anderson and other missionaries helped build a school and a health clinic. They didn’t have power tools, so they used a machete to cut lumber. Additionally, they helped make sun bricks to build walls for the buildings.
“We ran out of supplies, and it would be several days before they would receive more, thus (it was) a very slow process,” Anderson said. “In a couple of rooms they were finished. We saw the wooden desks that had been made and sent from Midwest Distribution Center in Chatham, Illinois.”
In 2010, Anderson saw further devastation on another mission trip, this time to Haiti through Servant’s Gift after meeting founder Larry Roberts from Woodhull, who led the journey. The trip came immediately after the 7.0 magnitude earthquake that hit just outside the capital city of Port-au-Prince.
Anderson said that in Haiti they taught Bible school to “13 or 14” children all living in one home. She added that much of the city had been badly damaged by the earthquake, and during the trip they also visited a tent city that was overrun by gangs. Still, they helped the children meet someone who gave them medical supplies and health examinations. Roberts also helped by giving money to children on the street, which they used to buy food.
“We all chipped in money to give to them, as they would even hop on the running board of our van,” Anderson said. “Larry knew they would take the money to buy bread or something to take home to their families.”
Although further removed in time from a natural disaster, Anderson’s mission trip to New Orleans’ Lower Ninth Ward in 2011 through Roseville-Swan Creek United Methodist Church showed the lasting effects of Hurricane Katrina on one of the more impoverished areas of the city. It was while renovating a house there that Anderson truly realized the magnitude of what had happened in 2005 and its lasting effects.
“When we were working on renovating a home that had been completely gutted, we were sanding, painting and getting it ready for their owner to return to it,” Anderson said. “It was another ‘wow’ moment when I collected a few seashells in the grass-covered back yard — that only meant that the rushing water had left them all behind.”
Currently, Anderson is devoting her time to being with her family, which now includes nine grandchildren and a husband she’s been married to for 53 years. She lives on a farm just east of Monmouth and she also recently completed a four-year term as president of the Spoon River District United Methodist Women in Alpha.
“You hear of all the things we throw away,” Anderson said of giving back. “They don’t have the infrastructure we have in Haiti and Liberia. There’s so much devastation and it just strengthened my faith. I always felt like I should do more than I do and ... I’m totally blessed. I’m blessed as much as there are stars in the sky. I’m blessed and I feel like I needed to share. I wanted to find out about other people, and it’s been so worthwhile.”
(Reprinted with permission from the March 8 issue of the Galesburg Register-Mail, www.galesburg.com)