Abuse survivor moves forward, one act of kindness at a time 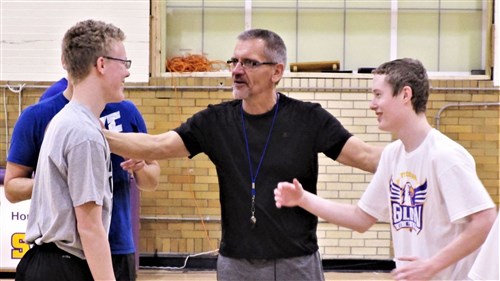 By Theresa Churchill
Decatur Herald & Review
MONTICELLO -- Dan Koenigs is a man who'd give you the shirt off his back.

Seconds after a basketball player smacked his nose on the floor during a recent scrimmage, Koenigs yanked his T-shirt over his head and handed it to the man to stanch the blood. Only then did he jog over to his gym bag for something else to put on.

His role coaching the Piatt County Golden Eagles basketball team for Special Olympics is but but one of many reasons the Piatt County Journal and Chamber of Commerce and Tourism named him Monticello's Citizen of the Year for 2017.

“He relates well with his players, and we're lucky to have him,” said Jackie Walk, Region 1 sports director for Special Olympics Illinois.

His team includes son Aaron, 15, who has high-functioning autism, but there's much more behind his dedication to helping than fatherly love.

First of all, he's a volunteer firefighter for the Cisco Fire Protection District, leads a weekly Bible study at Maple Point Assisted Living center and helps Piatt County residents who become homeowners through Habitat for Humanity and domestic violence victims supported by the Willow Tree Missions thrift store in Monticello.

“His name bubbled to the top this year as someone who gives back to the community without expecting anything in return,” said Denise Flaar, executive director of the Monticello Chamber. “You can't turn around and not see Dan helping out somewhere.”

Secondly, it's impossible to fully understand what drives Koenigs without going back to his time as an altar boy at St. John Vianney Catholic Church in Cambridge.

Spending the night at the rectory when he was 12, he said he awoke to discover his priest's hands on his body. It was the beginning of a sexually abusive relationship that went on for three years, during which time Koenigs said he also was abused by two other priests.

In 2002, after he and his family moved to Piatt County, Koenigs became one of the first Central Illinoisans to go public with his story as part of a burgeoning child sex abuse scandal stemming from news reports about pedophile priests who were shuffled around the Boston Archdiocese.

Koenigs decided to speak with me, then a reporter for the Herald & Review, because he thought it was the only way to make sure his former pastor would never be reinstated by the Catholic Diocese of Peoria, even on a part-time basis.

He went on to achieve more satisfaction than most victims of the scandal did.

Koenigs won an undisclosed settlement from the Peoria Diocese in 2005. Shortly afterward he saw his former pastor sentenced to 10 years in prison in Wisconsin, where the statute of limitations clock had stopped on allegations involving two overnight trips to Milwaukee when the man returned to Illinois in the early 1980s.

Yet this didn't keep Koenigs from hitting bottom afterward while tearing down his tent after a weekend of camping near Oakland.

“It was 95 degrees out, and I was grumbling to God about some stuff,” he said. “Then the fourth chapter of Proverbs came to me, and I understood it was time for me to figure out if I was going to be angry for the rest of my life or if I was going to focus on being a better husband, a better dad and a better person and move forward.”

The epiphany set Koenigs on a different path, one that is changing him.

The man I met in his 30s was clearly doing his best to deal with multiple emotions teaming just below the surface, while the man I saw the other day is 50, knows where he's going and doing his best to make his corner of the world a better place.

Koenigs has been a substance abuse counselor at the Piatt County Mental Health Center for nearly 20 years and was nominated for Citizen of the Year by his boss, Executive Director Tony Kirkman.

“Dan is a blessing to this community,” Kirkman said. “His is an inspiring story of restoration.”

Koenigs kept his faith, but left the Catholic church in 2004 for Cisco United Methodist Church, mainly because so many of his friends go there. He's since become a lay leader, not only for his own congregation but also for the Sangamon River District of the Illinois Great Rivers Conference of The United Methodist Church.

When you think about it, his reasons for accepting my recent interview request aren't all that different from what motivated him 16 years ago.

“I really pray this helps someone,” Koenigs said. “God gets the credit for where I am today, and I hope my story gives others hope.”

(Reprinted with permission from the March 10 issue of the Decatur Herald & Review, www.herald-review.com)