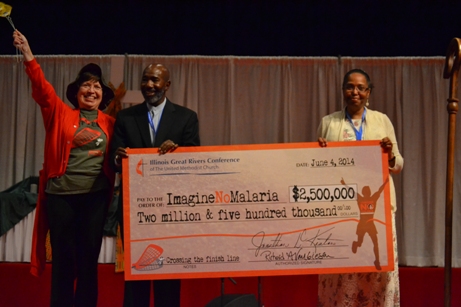 PEORIA -- Members of the Illinois Great Rivers Conference celebrated on opening night as an offering of more than $39,000 for Imagine No Malaria pushed the campaign past its $2.5 million goal.

"This is a testimony as why God sent me to the Illinois Great Rivers Conference instead of letting me spend my last four years in Michigan," Keaton said. "God reminds me every so often, 'I know what I am doing,' and I thank God for that and I thank God for you."

The Imagine No Malaria campaign began when Bishop Gregory V. Palmer challenged the Illinois Great Rivers Conference to raise $2.3 million for Imagine No Malaria in his 2010 Episcopal Address. "We need to immerse ourselves in the vision of a world without malaria," Palmer said. "Dream dreams so big that without working together they cannot be done and absent God's help we will surely fail. We need to attempt great things for God and expect great things from God."

The Rev. Larry Hollon, general secretary for United Methodist Communications and a visionary leader in the church's involvement in global health, was present for the celebration, calling the $2.5 million milestone "a celebration of people being a sign of God's presence in the world."

"Because of Imagine No Malaria, the United Methodist Foundation, the Bill and Melinda Gates Foundation and the Global Fund, The United Methodist Church is the only faith-based organization sitting around the table with governments of the world working on this problem of malaria, HIV/AIDS and tuberculosis," Hollon said. "(Because of your efforts), there are children, pregnant mothers and seniors who are alive this night because you cared. Lives have been saved and given health and hope for the future."

At the 2013 Annual Conference, after guest Bishop Thomas Bickerton told how IGRC had inspired his Western Pennsylvania Conference to increase its $1.8 million to a matching $2.3 million, the IGRC voted in the closing minutes of the conference to increase its commitment to $2.5 million. The $2.5 million is the second largest amount raised by any of the 59 annual conferences in the United States for Imagine No Malaria. The Minnesota Annual Conference has amassed $2.7 million in funds raised and pledged. Bishop Palmer, who was assigned to the West Ohio Conference in 2012, has challenged West Ohio to raise $3.5 million and has secured $2.1 million in cash and pledges. All three annual conferences are in the North Central Jurisdiction. Across the denomination, Imagine No Malaria has raised $60 million toward its $75 million goal.

View Gallery of Photos from the Imagine No Malaria celebration...