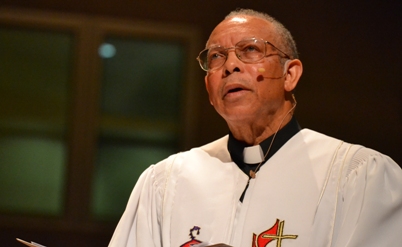 By Paul Black
SPRINGFIELD -- Bishop Jonathan D. Keaton used his opening night message of the 2014 Annual Conference to underscore the challenge of staying united in the midst of differences -- an issue that is facing the United Methodist denomination, while also reporting on congregations within the Illinois Great Rivers Conference and how they are finding vitality.

"Disciple making and mission go hand in hand and when we focus our attention on them, growth in membership and average worship attendance are by-products," Keaton said. He pointed out that following his election as bishop, he was contacted by both liberal and conservative groups, requesting an audience with him to persuade him to see things their way.

"After meeting with both, I told them I had been sent to be a bishop for everybody," he said.

Keaton's remarks came just days after a document signed by 80 evangelical large church pastors called for an "amicable separation" of The United Methodist Church due to what they consider breaches of covenant by pastors who officiate same-sex union ceremonies and complaints that either do not result in a church trial or a verdict they don't consider severe enough. Others argue that complaints in some conferences are being handled by a just resolution process afforded to bishops and that church trials are seen as an option of the last resort.

The declaration by the group of 80 has been met with a call for unity this week by 200 persons of the North Georgia Conference, rejecting a call for schism for the sake of unity. The proposal called instead for the church to remain united even in the midst of diverse opinions on issues of sexuality.

Keaton's observation seems to mirror a poll commissioned by United Methodist Communications, which was conducted May 30-June 2.  In a press release issued June 4, the same day as the episcopal address, respondents rated issues related to human sexuality rank significant lower than other concerns, and members want the church to engage on this issue and bring a positive perspective to the discussion.

Creating disciples of Christ, spiritual growth and youth involvement are among the top priorities for U.S. church members, according to the survey, which was conducted by Corporate Research of Greensboro, N.C. and Research Now of Dallas. It has a 4.4 percent margin of error. Read more...


"Some would tell God that unity cannot be achieved," Keaton said. "How does one stay in the church when the unity seems frayed? Two options -- we can build it up or we can tear it down. The choice is ours."


Keaton pointed out that many individuals find ways to get along at the ballpark, when some are rooting for the Cardinals and some for the Cubs. "We see things different, but we all celebrate when the song Take Me Out to the Ballgame is played," Keaton said. "Yet, we get to God's house, our unity dissipates too often and our connected bridges walls itself into silos. Whatever our lot, unity in the church is not a theological pipe dream for Christ; it may be to you, but not to Christ."

Keaton also pointed out that even in the midst of differences, there are some positives signs within the denomination. Last year, the Council of Bishops voted to work toward doubling the number of highly vital congregations, moving the number from just over 1 in 7 to 1 in 3 -- a goal accomplished. Highly vital congregations were defined by several factors: It was also reported that new church starts in the United States increased from 115 in 2012 to 145 in 2013 and that 640 faith communities have been formed in the non-U.S. central conferences in Africa, Europe and the Philippines.

Keaton also reported on signs of vitality within the Illinois Great Rivers Conference, noting that "the Can-Do Spirit outweighs weak resignation." He shared the creative ministry ideas offered by two churches from each of the conference's 10 districts, noting that one church is even praying for the Holy Spirit to empower their church.

Keaton reminded pastors that there are "a whole lot of laity that love the Lord, that have responded to the call to service and desire to see their church be a force in the community -- just like you do." And Keaton reminded the laity, "We (the pastors) can't do it without you."

Among signs of vitality in the conference, Keaton pointed to the Book of Discipline where it says, "A church in mission is a sign of God's presence in the world." In addition to the variety of local church ministries, Keaton highlighted the newly-formed Disciple Bible Outreach Ministries of Illinois, a partnership with the Northern Illinois Conference; the Imagine No Malaria campaign, and the conference's Liberia Partnership where 157 laypersons and 67 clergy have traveled to the west African country in the past eight years and the financial support and labor that has rebuilt schools and churches; dug wells; and provided pastor's salary support and scholarships.

"Who are gifted saints? They are people like you and I, receiving gifts. They are faithful followers of Jesus Christ.  And they are called to build up the unity," Keaton said. "We have a calling."