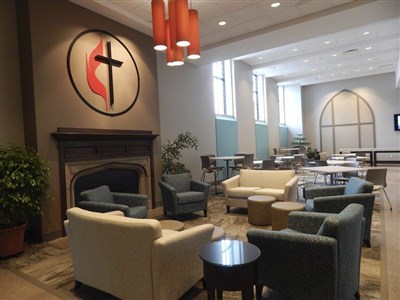 The $2.3 million project included an entirely new entrance with a portico, a spacious commons area with a coffee bar, an elevator, removal of a half-floor, new offices and restrooms, and installation of air conditioning — all to make the church more accessible and welcoming.

Also, the Sunday school classrooms upstairs were refurbished with new carpet and paint. The old fireplace in the office meeting room has been brought down to the commons, and is working again.

This was the first architectural change in the church, which was built in 1926-27 by renowned architect Harvey Skadden.

Groundbreaking took place April 30, 2017, and the first official Sunday service in the new space was this year on June 17.

Robinson, lead pastor, said usually a church loses membership during a building project. But, he added, “We have lost no one. It’s been virtually conflict-free. It’s miraculous.”

Even the skeptical members are on board, he said.

In the past, Robinson has said that he never wanted to lead a church during such upheaval.

“God has a sense of humor,” he said with a smile. “Here I am helping to lead St. James through a building project. It’s been a great joy.”

Now that Phase 1 is finished, except for some details, the congregation will begin thinking about Phase 2.

New associate pastor Greg Boylan is conducting small group meetings to get members’ input and ideas. Twelve meetings will be held, and a vision team will be formed.

“We’ll be asking questions about the church,” Robinson said. “It’s a time to listen to ideas of the people.”

Some ideas so far include: installing a commercial kitchen, determining a permanent space for the contemporary service, deciding what to do with unused space and looking for ways to improve the food ministry, which serves 400 families (1,500 individuals) a month.

“We’re listening to the voice of God,” Robinson said.

He also said that nine outside groups use St. James facilities, such as the Lions Club, Danville Barbershop Chorus, Vermilion Festival Chorus, DLO children’s shows and others.

“The congregation is proud that other community groups want to use our space,” he said.

Robinson and the congregation are looking forward to the next renovation phase.

“God’s not finished with us,” he said. “What’s in store? What does God have in mind?”

(Reprinted with permission from the Aug. 19 issue of the Danville Commercial-News, www.commercial-news.com)