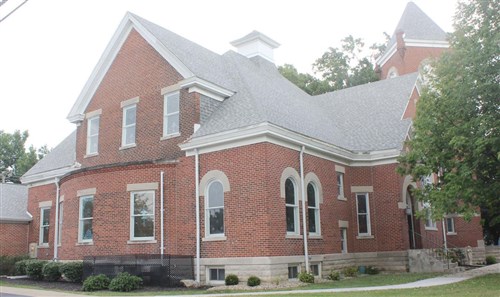 ROSSVILLE -- The Rossville United Methodist Church observed its 150th year with a celebration Sept. 30 with worship services at 9 a.m. and a dinner at noon followed by a celebration at 1:30 p.m.

Rossville’s Methodists had been meeting and worshipping for several years by traveling circuit rider preachers when they raised the idea of building a Methodist Church in the little village of Rossville.

In 1868, the first year they had their own minister, John A. Kumler, they held services in the newly completed school house after they overflowed the Gilbert home and the Henderson building. They began construction on a new church in 1869.

The first fine brick church was dedicated July 17, 1870. This church was later enlarged around 1890.

Newspaper articles from the time state that there were many revivals held at the church and by the end of 870, there were 81 members in the congregation.

The congregation eventually outgrew this church and the congregation’s current church was dedicated Feb. 28, 1904. The old church was removed and bricks were sold to Charles Umbarger and S.M. Postlewait and were used to build homes on South Chicago Street and West Attica Street. While the new church was being constructed, members of the congregation met in the upstairs of the Henderson building at 106 S. Chicago St. in Rossville.

The stained glass windows in the church were gifts from the Livengood, Mason and Stufflebeam families.

Congregation members John and Mildred Cadle are credited with recording much of the early history of Rossville and the Methodist Church in Rossville.

Many improvements have been made through the years. To serve the growing membership and growing activities, a new addition was built and dedicated May 14, 1949 named the “Fellowship Hall.” The latest addition was built in 2002 and included a new drive-up back entrance, new restrooms and handicapped-accessible entrance to the main level of the church.

A longstanding feature of the church is the pipe organ, which was installed in 1915, is still in use with some changes. Piano and modern musical instruments have also been incorporated into the worship services.
The church’s outreach missions include Mustard Seed Christian Daycare and the Banquet
program, which is presented at 5:30 p.m. Wednesday evenings for a eight-week period in the spring and fall. The church invites families, especially those with young children, to attend classes and supper at the church. The program is currently underway at the church for the fall session.

(Reprinted from the Sept. 24 issue of the Hoopeston Chronicle, http://www.newsbug.info/hoopeston_chronicle)