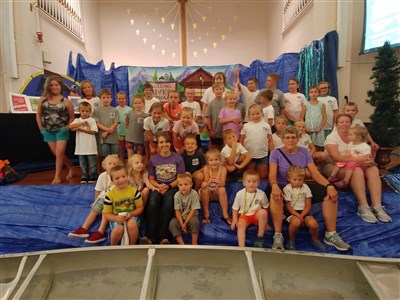 FAIRFIELD -- On Sunday, Oct. 14, the members of Fairfield First United Methodist Church will be celebrating 200 years of Methodist worship in Wayne County. The community is invited to the 10:00 a.m. worship service followed by the dedication of a time capsule and luncheon. Bishop Frank J. Beard, the presiding Bishop of the Illinois Great Rivers Conference will be preaching during the morning worship service. Bishop Beard’s preaching is remarkable, spirit-filled and reminds us of our heritage as “shouting Methodists.”

Early days
Fairfield First UMC has its roots and history intertwined and connected with those of other Methodist congregations throughout the 200 years or so of Methodists meeting together in the Fairfield area. The first Methodist preacher known to have come to Illinois was, Joseph Lillard in 1793, and he was possibly the first to preach in Wayne County. Class meetings in homes in Wayne County were known to have gone on in several places in the county several years before 1818. “The Wayne County History of 1884 states, ‘within a few weeks after the first settlers had come, John Harris, the Methodist circuit rider came in 1816 and preached at the home of Alexander Hamilton to a congregation of five persons. History then tells us that in 1817, “Archy Roberts, a talented local preacher, settled and organized the first Methodist Society at his home. That same year, “Daniel McHenry…established preaching at the John Gillison family home and the Hugh Stuart home.”

Stuart helped organize a Methodist Society known as Ebenezer which met in homes until 1840. They built a log building east of Fairfield and were an active congregation until they closed in 2016. While there were Methodists in Fairfield during these early years much of that heritage has been lost over time until Hugh Stuart’s family moved into Fairfield in 1832. His home in the 100 block on North First Street began serving as a meeting place in 1832.

The Methodists also met in a log court house on the site of the present county court house for a time until, “there came into office men who were indignant at the public building being desecrated by gospel preaching.” The group of early Methodists in Fairfield attempted to build a church house during these early years but were unsuccessful until 1851 when the built a 32’ x 45’ building which was used for some 25 years with more than that number of circuit riding preachers serving the Fairfield Circuit. In 1843, it was recorded that 23 locations were included on the Fairfield Circuit. This involved the appointed circuit rider preacher to travel not less than 300 miles each month on foot and horseback to serve and preach to the many small groups of Methodists scattered throughout the countryside.

The early Methodist Societies were strict and austere. Long sermons were given against, “indulging in the drinking habit, sinful amusements, timber cutting on government land, defrauding creditors through the use of bankruptcy law (which was new at the time) and voting immoral men into office. Preachers were given an allowance of $100 a year plus another $100 if they were married with another small stipend given per child. Most circuit riding pastors during this time didn’t live much past the age of 30 due to the harsh and demanding conditions of traveling so many miles to care for their flocks and reach the lost. Services in the early days of our small community were not held at a regular time but a bell was rung 30 minutes ahead of the preacher starting whatever day and time he came by this way. It was the only means available to get the word out.

Circuit days
The Fairfield Circuit in 1852 had 287 members with 44 of those at Fairfield and 42 at Ebenezer with other small groups around the county. The small log meeting house was used until 1876. The second church building was completed in that year on the south-east corner of the intersection of Delaware and South First Street (present location of the Masonic Hall). The cost was more than $14,000 for the 101 feet by 45 feet structure. Sunday School was held at 2:30 p.m. The monthly Temperance Union meetings were started and held there. Rev. J.A. Baird offered the following resolution which was adopted by this group, “Resolved: That we will use our influence in favor of the execution of our excellent temperance law, and against the sale and use of intoxicating drinks as a beverage in our town.”

There were no hymnals in the pews at first. A good song leader would sing a line with the congregation singing it after him. In 1877, cards with hymns on them were given out and in 1884 song books became a fixture when new book racks were placed on the back of the seats.

In 1886, the congregation through the vision and donation of land by Robert Hayward opened a Methodist college named Hayward Collegiate Institute where Center Street School now stands. Unfortunately, the college was destroyed by fire in 1898 after having educated over 10,000 students. Attempts were made to continue with classes being held in the church and area homes but efforts to raise funds to rebuild were sadly unsuccessful.

Circuit riders and preachers in the early years are not all known. Many were appointed for one year or less. But since 1842, the church records show that at least 82 have served this congregation. When the Methodist Church began using itinerant pastors instead of circuit riders, the length of time pastors have been appointed to the church has increased. The church has owned and provided a number of parsonages for pastors and their families since 1855. Our first woman pastor, Donna Blythe, was appointed here in 2014.

A child shall lead them
In the 1890’s the Methodist church along with other churches in the community operated a mission school in the west side of Fairfield. A little girl named Ellen Moore died at the age of seven after a long illness on Dec. 30, 1900. During her illness as she watched other children walking to Sunday Schools on the East side of town, she remarked to her mother, “I wish I could build them a church.” The idea caught on and donations came in. First Methodist helped with the construction of Fairfield’s second Methodist Church which formally became a separate congregation in October of 1909.

Throughout its history the church has provided worship, Christian discipleship and leadership in the community. The church has changed as the times have changed. Electric lights were added in 1898. The church grew in membership and the need for a larger building was recognized in the 1920’s. The present sanctuary was completed in March of 1924. Grace Sullivan is the only current member who worshiped in the old building. She remembers at the age of seven the church moving to the new building and sitting with her family throughout her life in our current structure. The building was built to last 100 years and has served First UMC well throughout the past 96 years. The present Educational Building was completed in 1962.

Today
The congregation is known for benevolent acts and leadership in ministries that have served the needs of our community. The church has a 50-year history of coordinating the local Meals on Wheels ministry, operates a Mobile Food Pantry for area residents who are elderly and disabled, reaches out to those in need financially in partnership with Wabash Area Development Inc. and continually seeks to be the hands and heart of Jesus to those in need. Bible Studies, children and youth ministries, men’s groups and women’s ministries plus Sunday School classes for all ages are provided. We sponsor and/or assist with many other ministries such as, the bi-annual formal dress giveaway for area young women, summer fan giveaways, the area school supply ministry, and the Twigs summer lunch ministry for children.

The church is known for its commitment to traditional worship and faithful adherence to scripture and Christian teaching. We are blessed with a fantastic music ministry and choir. The Christmas Cantata fills the church with worshipers each season when we celebrate Christ’s birth.