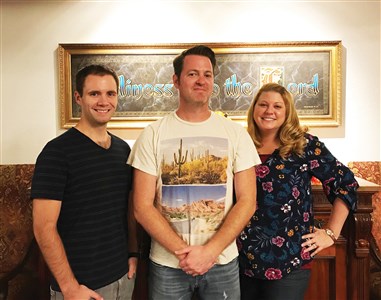 Had three church employees just kept driving to work after lunch Oct. 4 instead of stopping to check out a smoking house on Thursday afternoon, Signal Hill Fire Chief Tom Elliff said there “certainly would have had a tragic outcome.”

A house in the 1300 block of Express Drive near Belleville had a kitchen fire that rendered the occupant helpless, Elliff said. But St. Matthew United Methodist Church’s children’s minister, contemporary worship leader and the associate pastor drove by at just the right time.

Lindsay Vollmar, the children’s minister, is the one who prompted the three to stop and check out the smoke, her husband Matt said.

“We probably would have kept going,” Matt said on Friday, admitting he and Andy thought it was simply smoke from a chimney.
“We need to look,” she told them, stopping the car.

Elliff said on Friday that the Signal Hill Fire Department got the call at about 2:30 p.m. Thursday. The firefighters arrived to see the woman safely out of her house. He said the fire started in the kitchen, when the occupant apparently left something on the stove and got distracted by a phone call downstairs.

“She heard the smoke detectors, and the house was full of smoke. (Instead of leaving as firefighters recommend) she went to try and help things out and get rid of the smoke,” he said, adding that she began to open windows.
Instead, she was overcome by the smoke in a back bedroom.

Matt, the contemporary worship leader, went to the back of the house and saw smoke pouring out. He circled to the front again and he thought he heard somebody coughing from a back room.

“So Lindsay opened the (front) door and smoke poured out,” Matt said. Just as Lindsay said she would call the fire department, they heard somebody call for help.
“Well, we gotta go in,” Matt said to them.
Associate pastor Andy Black and Matt saw thick smoke as soon as they went in.
“I told Matt, let’s get down ... together we went around the corner, started grabbing doorknobs and opening doors,” Andy said. They eventually found the woman and walked her out.
It wasn’t quite that simple, Matt said.
“I’m not gonna lie, it freaked me out,” he said. “The thing that was crazy is, it was just a stove fire. But the flames were high on the stove, and there was a ton of smoke. I didn’t realize just a stove fire would cause that much smoke.”

Matt says he stopped there when he saw the stove, and it was Andy’s calm demeanor and “hey man, follow me” commands that snapped him back to reality.
“If I was a calming force, it probably wasn’t me. God had his hand in that situation,” Andy said.
Andy’s been at St. Matthew’s for only three months, and says all his previous churches are welcoming and loving. But at St. Matthew’s, “No matter what day of the week it is, you just kind of feel loved. They’re proud to be that kind of church.”
“They really love people,” Andy added.