Drawing from the Sun to Draw to the Son 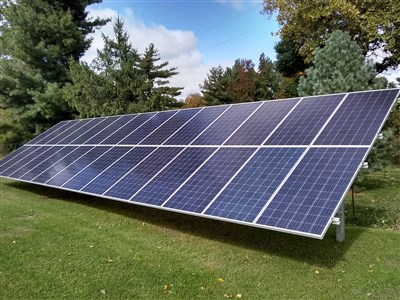 There are three things a pastor loves to do -- tell the congregation they are saving money, use catchy plays on words, and create opportunities to tell people about Jesus. It is a rare occasion when one can do all three.

But when Colchester UMC installed its new solar panel last summer, the opportunity to do all three was created as a result.

The church found out Tri-States Renewable Energy (Tri-States) through electrician Mark Lowman of Nauvoo. He was making sure the church knew it was eligible for a renewable energy rebate from the State of Illinois when the church installed the LED lighting in its fellowship hall.

Through a casual conversation with Lowman, he mentioned his brother-in-law, Tim Wollbrink and Tri-States. The trustees’ curiosity was piqued so they called Wollbrink for a sit down. He came with proposals in hand and through his presentation the trustees realized that if we were to install a solar array at the church there was a very real possibility that we could stop paying for electrical service.

The trustees and finance committee began looking over the possibility of using a memorial fund to cover the cost of the installation of the solar energy and found that there was a memorial available that we could use for that very thing. Following a meeting of the trustees and Ad Council it was determined that installing solar as an alternative source of energy for the Colchester United Methodist Church was not only feasible, but necessary.

The motion to install solar with said memorial money was met with enthusiastic discussion, excitement, and sensible stewardship. The proposal passed without objection, but with one caveat, that all money saved from the use of solar power, and all rebates received from same, should be placed back into the memorial fund from which it was used until said memorial was back to its full amount.

As a result, Colchester UMC went full solar mid-July. Based on the estimates given by Tri-States there will be a 6 ½-year return on investment for the church. Meaning that the money saved coupled with the State of Illinois rebate the system will pay for itself in that time, or the Sun will help to reduce the monthly outgo of the church.

Even better, the Son, through His creation, is blessing His people exceedingly abundantly above all we could ask or think. To Him be the glory! (Ephesians 3:20-21)