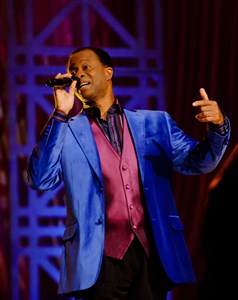 The only person in history to be a member of the Gospel Music Hall of Fame, the Kentucky Music Hall of Fame and the Amateur Radio Hall of Fame is 5-time Grammy and 11-time Dove Award winner Larnelle Harris. Harris will be in concert on Friday, June 7, 7:30 p.m. at Peoria Civic Center’s Carver Arena in a concert for the Our Conference, Our Kids campaign.

Harris recently released his first memoir entitled, Shaped Notes: How Ordinary People with Extraordinary Gifts Influenced my Life and Career which became a #1 best-selling book on Amazon within three days of its release. The book offers long-time fans of Harris a glimpse into the childhood and early career of one of Christian music’s most renowned vocalists. And Harris admits, at times, it was a difficult process to go through.

“There were a few tears shed through the writing process,” says Harris. “Remembering all the people who have poured into my life and how they helped me was humbling. I hope what readers take away from this book is that we all have people in our lives that we can influence for the good or for the bad. And I sometimes wonder where I would have ended up had it not been for the people who came across my path and encouraged me with their words and actions.”

In addition to his Grammy and Dove Awards, including being named Male Vocalist of the Year three times by the gospel music industry, Harris has garnered 19 #1 national radio singles and countless top 10 hits. Songs such as How Excellent Is Thy Name, I Miss My Time with You, and his signature song, Amen, are now considered modern gospel classics.


From the White House to the 38th Parallel, Harris has impacted audiences across the globe with his music.  He was the first gospel artist to perform inside the Kremlin after the fall of the Soviet Union. He is one of a handful of celebrities to receive the Ad Council's Silver Bell Award for Distinguished Public Service in recognition of his song Mighty Spirit as the theme song for the longest-running Public Service Announcement in television history. Harris was recently honored by his home state of Kentucky with the Governor’s Lifetime Achievement Award in the Arts.

Harris was a featured performer for the Billy Graham crusades for many years and is seen frequently on Gaither Homecoming television shows. He recently performed at the National Day of Prayer event in Washington D.C., New York’s Carnegie Hall, and for a gathering of U.N. Ambassadors in our nation’s capitol, among other national and international venues.

Ticket information will be coming shortly and will be separate from the Annual Conference registration.