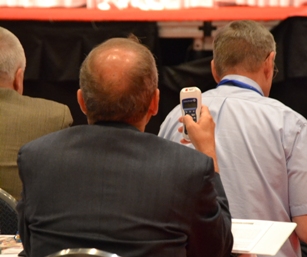 The measure, recommended by the Conference Board of Pensions, would move active clergy covered by the conference’s self-insured plan to purchasing insurance from the exchanges that are a part of the Affordable Care Act.

IGRC Director of Administrative Services Rick Van Giesen said he would be holding District meetings in each of the conference’s 10 districts to assist pastors with understanding enrollment decisions. Those meetings will be scheduled for the early fall since Open Enrollment for the exchanges for 2015 will be Nov. 15 to Dec. 15, 2014.

The proposal, which was approved 735-106, also calls for a $12,000 health insurance allowance to be added to full-time clergy compensation packages by their congregations.  Currently, local congregations pay $17,520 per full-time pastor for insurance coverage, while pastors pay $65 per month for individual coverage and $320 per month for spousal coverage. The actual cost to the pastor purchasing insurance would depend upon the plan which the pastor chooses.

Most of the floor discussion centered around the tax issues such a change will create.  Currently, the $17,520 assessment is tax-free; the $12,000 housing allowance will be taxable because the Affordable Care Act doesn’t allow it to be tax-free. Clergy also lose the ability to put aside pre-tax dollars to fund a flexible spending account since such an account requires an employer to have its own health insurance plan.

In 2013, health care costs exceeded revenue from the local church assessment and premiums by $1.5 million. As a means of addressing the shortfall and to provide a delay into moving to a new place, the Conference approved $500 deductibles for in-network expenses and $1,000 for out-of-network providers; additional deductibles on prescription drugs and a $1,500 in-network family deductible and $3,000 for the family out-of-network deductible.

For pastors, the impact is mixed.  Pastors with lower than average taxable income will eligible for tax credits which will offset some if not all of the additional tax liability. Pastors with high compensation and/or with spouses with high compensation, insurance will be affordable but will not qualify for tax credits. Pastors will also have the option of enrolling on a spouse’s health insurance plan if one is provided. Local churches being served by full-time pastors have the option, but are not required to provide more than $12,000 for the health insurance allowance.

Early retirees will not be paying the $18,540 (clergy and spouse) to the Conference prior to becoming Medicare-eligible. They will simply continue with their exchange plans. Retirees past the age of 65 are not affected by the change as Medicare is already primary.

One amendment called for the approved legislation to take effect July 1, instead of Jan. 1, 2015, while the other amendment was more editorial in nature.

The new streamlined Connectional Table will replace a Connectional Table that numbered more than 100, which made it difficult to function. The former Connectional Table requested a smaller size and better clarity of purpose and objectives at its last meeting. The new model is fashioned after a local church Administrative Council which makes its structure more understandable and places mission, ministry and finance at the same table.

In other action, the Conference: