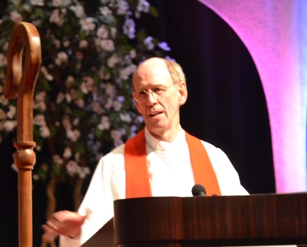 PEORIA – In a world that confuses success with significance, Bishop John Hopkins asked those attending this year’s ordination service, “Can we recognize greatness?”

Using the text from Mark 1 where James and John asked for preferential treatment in sitting to Christ’s left and right, Hopkins said several things were happening:

First, they had forgotten their call to servant ministry.  They were following Jesus for the wrong reason.

“Tonight, ordinands are being claimed by the church and the church gives them authority for servant ministry,” Hopkins said. “Ordination credentials are not for us but a sacred trust with the church as evidence of the life, death and resurrection of Jesus Christ.”

Hopkins asked: “Would people recognize the greatness of Jesus Christ by our humble service.”

He noted that servant ministry was “tough these days” as witnessed by the Pew Research Group who published that a vast number of young adults under the age of 30 are “spiritual but not religious.”

“At some point, you will be tempted to be religious but not spiritual and try to shape ministry in your image,” Hopkins said. “It isn’t our low nature but our high nature that gets us in trouble. Treat your church as a grandchild (love on them) not as a child.”

Second, you will be tempted to be spiritual and not religious.

“There will be a time where you will be critical of an appointment or the denomination and you will want to put distance oneself from an accountability group,” Hopkins said. “There is no way to escape.  John Wesley believed in accountability in which the classes asked, ‘How is it with your soul?’”

Bishop Hopkins told the story of Captain Elezar Hull. “In the days when the great fleets of whaling ships put out of New Bedford, Mass., to scour the oceans for whale oil, one of the most famous captains was Eleazar Hull. Captain Hull took his vessel into more remote seas, brought home greater quantities of oil, and lost fewer seamen in the process than any other master of his time. This was all the more remarkable because he had never had formal navigational training of any kind. When asked how he guided his ship so infallibly over the desert of waters, he would reply, ‘Well, I go up on deck, listen to the wind in the riggin’, get the drift of the sea, and take a long look at the stars. Then I set my course.’

“One day, however, the march of time caught up with this ancient mariner. The insurance company whose policies covered the vessels of Captain Hull’s employers said they would no longer write a policy for any ship whose master did not meet certain formal standards of education in the science of navigation. Captain Hull’s superiors could understand the need for this new rule. But they were at a loss to know how to approach this proud old man who had spent his entire life on the deck of a ship and tell him that either he must go back to school like some apprentice seaman or be retired. After some discussion, they decided to meet the problem head-on. Three of the company’s top executives waited on Captain Hull and put the problem before him as tactfully as possible.

“To their surprise, the old fellow responded enthusiastically. He had, it appeared, always wanted to know something about this “new-fangled science of navigation” and he was quite willing to spend several months ashore studying it. So the arrangements were quickly made and Eleazar went back to school, studied hard, and graduated near the top of his class. Then he returned to his ship and put out to sea for the usual two-year voyage.

“When the captain’s friends heard that he was putting into port again, they all trooped down to the dock to meet him. They inquired eagerly how it felt to navigate ‘by the book’ after so many years doing it the other way. ‘It was wonderful,’ Captain Hull responded. ‘Whenever I wanted to set my course, I’d go down to my cabin, get out all my charts, work through the proper equation, and set my course with mathematical precision. Then I’d go up on deck, get the drift of the sea, listen to the wind in the riggin’, take a long look at the stars, and correct my computations for human error!’”

Hopkins said when one is out of balance between spirituality and religiosity, there is a tendency to “be hard on oneself and drive oneself.” Hopkins said the family gets the brunt of the consequences from being out of balance.

“Within each of us is God’s Spirit but when we are out of balance, we fail to hear God speaking,” Hopkins said.

View gallery of photos from Ordination and Commissioning Service... 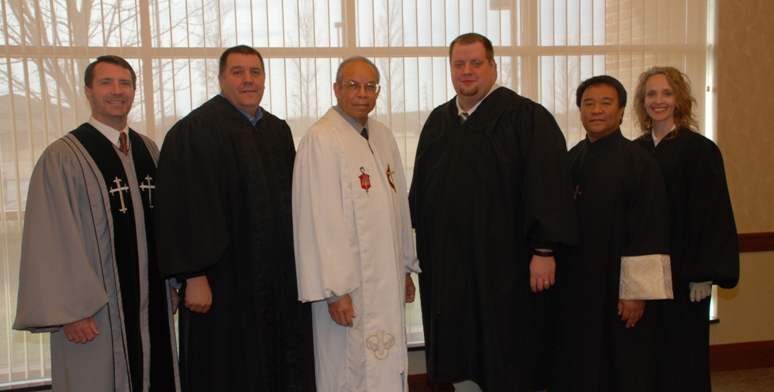 Three were ordained elders in full connection and five persons were commissioned for the work of provisional member elders at the 2014 Annual Conference’s Service of Ordination and Commissioning.