A call to serve in higher education 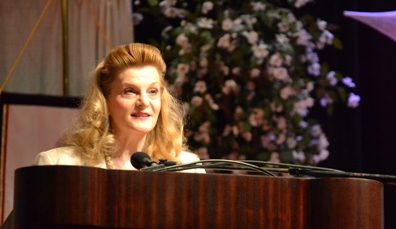 By Paul Black
PEORIA --  For MacMurray College President Colleen Hester, a love for learning was a guiding force toward a vocation in United Methodist higher education.

Hester shared her faith story as the Friday morning speaker at the 2014 Annual Conference.

Hester said her early life provided the shaping for her ability to say yes to God’s call on her life. “My early life was full of potent memories of the joys and privilege of learning,” she said. “It was filled with reading, conversation and exposure to the arts, foreign travel as well as museums, art and literature. In reflection, I didn’t understand my vocational experience as it was happening.”

She pointed to her mother, who strengthened in Hester and her siblings empathy for others and a readiness to identify with others, standing in their shoes and extending help. “My early memories were happy with the sense that life was going to be an adventure to be lived and shared with people I lived and to make a difference for others and to serve God.”

The summer after her first grade, Hester said her father found her reading by flashlight under the covers after she was supposed to be going to sleep. “I had a genuine passion for learning,” Hester. “I had a sense that the pursuit of learning was not about me but about something far bigger and greater – God’s plan.”

When her father worked in other cultures, Hester’s family was able to experience new worlds, very different customs, new foods and things such as rain forests, the unique flora and fauna as well as seeing the universality of human love and faith.

And then adversity hit Hester’s family.  Her father’s plane crashed and hung on the brink of life and death. Despite the long odds, he survived, came home and with the aid of rods where bones once were, he walked.

“I realized some of my optimism and belief in humans’ capacities to transcend challenges was born from my family’s experience, our mother’s faith, our connections with one another and with God,” she said.

When named the first woman president of MacMurray College in 2007, Hester drew on her love of learning to align the institution with The United Methodist Church.  Shortly after arriving, the Council of Bishops and the general church agencies started talking about Four Areas of Focus which served as the strategies for fulfilling the mission of “making disciples of Jesus Christ for the transformation of the world.”

“The Four Areas of Focus have exciting connections to higher education,” Hester noted. “John Wesley believed education was the key to a fuller, richer life. One writer has said of Wesley, ‘knowledge for him was not so much a purely intellectual attribute but rather a channel of self-understanding which is crucial for salvation.’”

Methodist higher education affords scholars and students with greater academic freedom and fosters collaboration. “Where does vocation fit in? The average American career now lasts 4 ½ years,” Hester said. “A profession gives you certain skills, so that you can be of service, but vocation is the key to higher education that is distinctive. What is needed first is vocation informed by the Christian tradition. We are called before we have the words to talk about it.”

MacMurray College was founded in 1846 and has 33 academic and pre-professional programs. The school has been accredited since 1908 by the North Central Association of Colleges and Schools. The college was named a Top 20 baccalaureate college in the nation by Washington Monthly two of the past three years and 96 percent of the 2013 graduates reported being employed or attending graduate school.
News