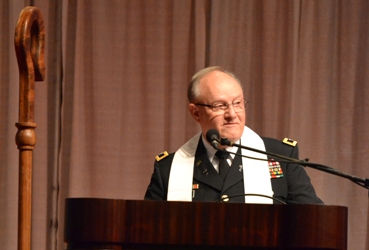 By Chaplain Capt. John Read
It is so incredible to be home and I am so thankful for this opportunity to provide a simple message for this family. It won’t be terribly long, if you can imagine needing to get to 13 different locations in a day, the service and the messages can’t be very long.

Granite City Good Shepherd UMC was the last church that I pastored in the former Southern Illinois Annual Conference. There was a remarkable man of faith in that church. Born and raised a Roman Catholic, and married to our church pianist, Bill was a prayer warrior.

A small group of us worked on an intercessory prayer study program out of the Upper Room so that we could become prayer partners with the Upper Room. Bill was a faithful part of that group and there were some nights that it ended up being him and me. We would head to the study in the basement of the parsonage and pray for hours, for folks in the church, for everything imaginable.

One night, Bill brought with him a magazine. It was an Airman magazine and before we prayed, he opened it to an article on the Air Force chaplaincy and then he looked at me and said, “You know, this is what you are supposed to be doing in the ministry.”

I broke out into a cold sweat. I had never told Bill that I felt called to serve in the military setting. Bill Pyatt knew about this our first year of seminary, Steve Lirely and Randy McGuire and Bill Cooper. They remember the feeding frenzy in my colloquium group my first week when we wrote a two-page position paper on vocation and calling, wherein I articulated that I felt called by God and gifted by the Holy Spirit to serve in ministry with the vocational setting being the military.

Well, it was like a feeding frenzy at the shark tank with my peers and Dr. Walt Bruggemann. So I tucked that away until three years after seminary, when Bill confronted me with that blasted magazine article. I thank him for it. You can’t imagine the lives that have been touched by this validated journey.

I seriously doubt that if Bill hadn’t put that article in front of me, that I would not have completely pursued this nuanced calling. Bill just helped to complete a work that was begun long ago with Sunday School teachers and youth leaders. Most notably, Carlene Matthews, George Brooks, Royce Savage and Charlie Schwab, whose lessons I never forgot and they became so formative.

Let me fast forward: I have brought this cross stitching with me for a reason. In August 1992, I was medically retired from the Army, sent home to Illinois to see family, en route to San Antonio, Texas, for a much-needed bone marrow transplant for acute myelogenous leukemia. One of the transitional weekends, my good friend, Joe Scheets, asked me to speak, so I did using Philippians 4:13 which has become my banner verse.
Before we left to drive to San Antonio, Joe had given me this cross-stitching done by a dear laywoman from Wood River First UMC. It was hung on my hospital wall and as my life hung in the balance between life and death, this emaciated 120-pound body could look at that cross-stitching, and I could go on a little longer when it would have been much easier to die. It wasn’t just the cross-stitching but to whom and to what the cross-stitching was attached. I would not be where I am without the powerful ministry of laity and its effect upon my life.

So in closing, let me tell you a little more about Bill.  You see, Bill was destined to do something with his life, too. Bill answered his own call, and became a licensed local pastor. My dear friend, may he rest in peace, the Rev. Bill Hesseldenz. Now there are more, we could go on for a very long time. The Rev. Joy Caschetta had remarkable gifts as a layperson which she carries into ministry. Besides Bill, there were two others at Good Shepherd who honored me as I pursued the possibilities of military service as a chaplain but keeping it a secret until it was clear that this was the direction my life and ministry would go – Erv Stengel and Harold Watters.

So here is my point: I would not be where I am, doing what I am doing, without them in my life. They are that critical. I have seen some of the most horrific things imaginable but have been blessed beyond measure to be able to care in this setting. I carry the burden of coming home when others did not. I’ve watched innocent children be blown to pieces in the name of God and I’ve held dying soldiers in my arms and prayed for comfort and commendation at the time of their deaths.

So, I have reflected often on whose imprint is upon my heart, whose faithfulness is with me and has enabled me to be present in these hard moments. The truth is: none of us would be here doing what we are doing – lay or clergy – without this great cloud of lay witnesses whose ministry on behalf of the Church in this sin sick world is so key and important. So take some time today to reflect on who these folks have been and are for you. If you they are still living, thank them for how God has used them. Who knows when a simple cross-stitching will help save a live or a simple Sunday School lesson lead to a life of service.

Thank you for this opportunity to share this simple devotion from my heart.