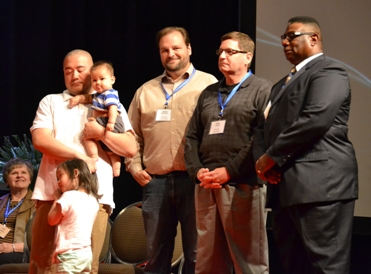 For many years, Peoria First UMC has worked in partnership with a neighborhood elementary School. That outreach was expanded through a summer soccer program. Identifying that a growing number of children and families touched through these ministries were Latino, Rev. Adrian Garcia, was appointed as one of the pastors of Peoria First UMC in 2010.

After starting in 2011 with 10 to 12 people, the bilingual worship now averages 40 adults, plus children and youth, participate in worship weekly and about 60 total adults are connected with the ministry. Through the partnership between the church and congregational development, Pastor Miguel Rios has been added to staff as worship leader, to increase the reach of this ministry.

In 2010, Cambridge UMC was at a low point. They were afraid of what the future held, as worship attendance had dropped into the 50’s, less than half of what it had been a few years earlier. That July, Rev. Steve Kettelkamp was appointed as part-time interim pastor, with David Joyce as a lay supply pastor. Bringing renewed focus through strategic visioning and planning, the church began to see hope and initial growth.

Conversations started with Geneseo First UMC regarding the possibilities of a partnership in ministry. Out of that the Geneseo First/Cambridge Multisite was born. David Joyce, now a licensed local pastor, is appointed as the Associate Pastor of the Multisite with his primary responsibility being the Cambridge campus pastor.

Since partnering with Geneseo First, shared resourcing has led to a new after-school program, a re-started youth ministry, and because of growth in worship attendance, in September 2013, through the partnership of congregational development, a new worship service led by a praise band was started, reaching families with children. In 2013, worship attendance was up 22 percent. Since launching the new service attendance is up 51 percent. On Easter Sunday, Cambridge UMC had 293 in worship.

Geneseo First, with encouragement from their District Superintendent Sylvester Weatherall, and in partnership with the Office of Congregational Development, is sending a staff member to be appointed as a local pastor to start a new congregation in the Rock Island area. Gerald Aloran, who has served as First UMC’s youth pastor, will begin July 1 to gather a launch team with the goal of launching weekly worship by the fall 2015.

Also, through partnership with the Office of Congregational Development, in September, 2014, Fairview Heights Christ UMC will launch their third campus. The worship site is in a Grange Building just outside the east entrance of Scott Air Force Base and the primary target are the members of the military and their families.

Christ UMC is finding that the multisite ministry has not only increased worship attendance and professions of faith, but has greatly multiplied and grown their laity in leadership. In fact, the leaders of the first multisite campus, Collinsville/Maryville, Jon and Robyn Clark, were the 2014 Denman Award recipients (see related story on page 20) because of the amazing evangelistic work they have done both individually and through the campus leadership, connecting many people with Jesus Christ.

I am excited about what God is doing through the partnerships between local churches and the Office of Congregational Development. And I am excited about the appointment of Gerald Aloran to serve as the planting pastor sent out by the Geneseo 1st/Cambridge Multisite to launch a new congregation in Rock Island.