Ministry of the Laity seen in 2014 Denman Award winners

By Paul Black
PEORIA – While the 2014 Annual Conference theme was Ministry of the Laity, the selection of this year’s Denman Evangelism Awards underscores the significance an empowered laity can have on the life of the church.

The IGRC Evangelism Committee has announced the awarding of the clergy Denman Award to the Rev. Nancy Ribes, pastor of Mt. Olive and Sorento UMC’s and the laity Denman Award to Jon and Robyn Clark, who are a part of the Maryville Campus of Fairview Heights Christ UMC. The awards were presented at Thursday’s John Wesley Fellowship of Illinois luncheon along with church growth awards which were presented to the church’s recording the greatest percentage of professions of faith. 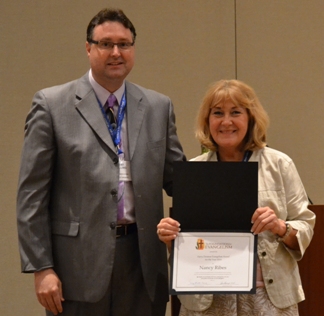 For Nancy Ribes, ministry has been a part of her life even before she became a part-time local pastor.

“Nancy was one of my church members at Benld from 1993 to 2000,”wrote retired pastor Rev. Nelson Reiber. “She has a very strong passion for those that need to receive Jesus as their Savior. She works very hard in the church and in the world where ever she is serving.”

Reiber noted her work as a youth worker, a leader and helper on many mission projects. “In each setting, people were led to the Lord.”

Rachael DeMartini, another person who nominated Ribes, agreed. “I have known Nancy for about 37 years. We worked together in the Benld church through choir, Bible School, and playing the piano and organ together,” she wrote. “Nancy always strives to do her best in whatever she does. We also taught in the same elementary school until Nancy retired from full-time teaching three years ago.”

DeMartini said despite challenges, “Nancy has helped me to see that no matter what, God is always, without fail, with me through whatever is going on in my life.”

Active in the community, Ribes has been instrumental in starting a local food pantry in Mt. Olive. She is also active in the Walk to Emmaus gathers, drives the church van to pick up children and those unable to get to church and is very active with the youth in both her churches. 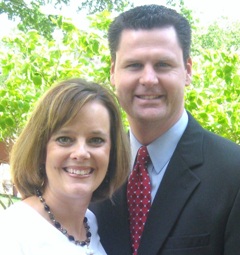 Jon and Robyn Clark are the bi-vocational campus leader of the Maryville campus of Fairview Heights Christ UMC.  Called and selected to serve in leadership in spring 2011, services began at the Maryville YMCA in September 2011 with 50 Pioneers from the main Fairview Heights campus. Presently, more than 100 worship at the campus weekly despite the 50 Pioneers returning to the home church.

The campus has three children’s ministry rooms with a fourth to launch soon, a junior high youth Sunday School and an adult Sunday School. Because the campus has other uses, the church sets up and tears down each week. The Maryville campus was launched by Fairview Heights UMC in partnership with the IGRC Congregational Development Team funding.

“They serve faithfully, effectively and fruitfully and offer a living example of how Laity can be in ‘real time’ ministry and keep their day jobs,” wrote Rev. Shane Bishop, senior pastor of Christ Church. “Saying yes to this opportunity (as campus leaders) has literally changed the trajectory of their lives.”

In addition to campus leadership, which includes leading worship where the message is delivered via video from the main campus, the Clarks are responsible for Leadership Huddle meetings. They have led the first Marriage Study for Maryville and Jon Clark has formed a men’s accountability group at Maryville and an Iron Man (men sharpening men) group in the Collinsville-Maryville area. He is involved in evangelistic efforts through No Greater Love ministry that takes men to Mardi Gras each year to street preach.

Robyn has helped to establish a women’s Bible study group and co-leads the Marriage Study in their home. Several additional marriage studies have grown from theirs.

“Jon and Robyn seek out and greet the people that come through the door with energy and a genuine caring spirit,” wrote Steve Garlinghouse. “(Through their leadership), my wife an dI are able to openly invite friends to our church and know with confidence they will be greeted and accepted right where they are which is what I believe we are called to do.”
News