By William M. Hammitt
Normal First UMC
NORMAL -- The motto of Normal First UMC for many years was “Serving Christ: Community and Campus.” The church’s history has demonstrated that the words, “and Beyond” could have been added as individuals have gone on from here to serve Jesus Christ all over the world.

Members and guests will celebrate that 150 years of history in September as we take a look at total span of history and how visions and dreams were planted for others to harvest. 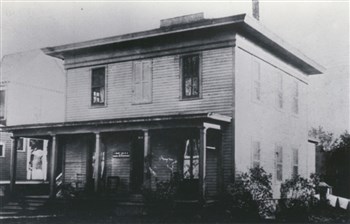 The intertwining of campus and community was very apparent from the earliest days. The City of Bloomington was chartered by the Illinois General Assembly in 1850. In May 1853, the Illinois Central Railroad ran its north-south line from Galena to Cairo straight through the community.

In October 1853, the Chicago and Mississippi Railroad built its diagonal line from Chicago to Alton crossing the Illinois Central 2 ½ miles north of Bloomington in what is now called “uptown” Normal. This was the drawing card for what later became Normal.

Once the Old Main Building was completed in 1860, an interdenominational service was held on the top floor of Normal Hall on Sunday afternoons. The Protestant ministers in Bloomington took turns conducting these services. Also during this time various denominations of Normal residents held prayer meetings or classes in the various homes of their members or in individual classrooms in Old Main. In Spring 1865, the Congregational Class voted to organize as a Congregational Church. They continued to meet in Old Main.

Illinois State’s second president, Dr. Richard Edwards, became concerned that there was no church building developing in the new town. He felt strongly that the spiritual needsof the students were as important as their educational needs. Being a Presbyterian, Edwards realized that there were more residents with Methodist leanings than there were of his own church, so he approached them voicing his concern that there was no church building in town. On Sept. 5, 1865, Rev. J.W. Van Pelt, Rev. C. D. James, Dr. T. M. Taylor, Andrew Mason, M. Rallins and Robert Fell, brother of Jesse Fell, met at the Mason’s home at 309 North St. (the east end of the parking lot closest to Watterson Food Service today) and voted to organize a church with 23 members.

Dr. Edwards attended the Illinois Annual Conference of The Methodist Episcopal Church on Sept. 20 and made a personal appeal, noting “the village is increasing in population with astonishing rapidity. Its present population is more than five times what it was three years ago. And the prospect is that the future rate of increase will be still greater.”

The Annual Conference gave its warm approval and support for the construction of a Methodist Church in Normal. Normal and Twin Grove were made into a circuit with the Rev. C.D. James appointed as the first pastor. James’ son, Edward J. James, was president of Northwestern University and later of the University of Illinois.

A building committee was formed. A lot at Ash Street and Fell Avenue was donated to the church by philanthropist Daniel Sill. Construction was far enough along for worship to be held in the basement of the unfinished church by September 1866. The completed church was dedicated June 7, 1867. 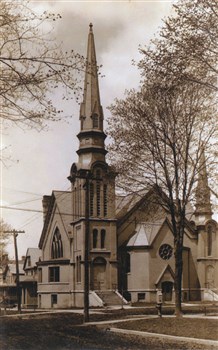 A writer of the early history of the church says, “More than one Methodist family ate poor fare and wore scant clothing that money might be given to the church. The woman planned and labored and sacrificed that the building might be erected. The Trustees, after giving all they could, borrowed large sums for which they did not hesitate to give their personal notes. God’s house was dearer than their own and God’s house grew apace, until when Conference met in Bloomington in September 1866, the new church was rapidly approaching completion.”

In 1880, the church was struggling to pay off the original debt to build the church building and parsonage. Rev. R.D. Russell was appointed to Normal First in September 1880. The debt was represented by two notes – one for $800 and the other for $1,300. Rev. Russell proposed to the Official Board that if they would raise the $1,300 locally, he would raise the $800 from outside the area. The Board felt Russell would be jeopardizing his own personal funds, but he insisted and the Board gave its approval. On March 15, 1881, the two notes were paid off the church was debt-free.

Lightning hit the spire of the southeast steeple in 1908. The first was quickly put out but the spires were torn off both of the towers.

In the early 1920, the Official Board, in an attempt to improve giving, authorized the publishing of how much each member pledged and how much they paid. It was not only revealing, but its popularity was probably indicated by the fact there is no record that indicates it was ever done again.

In September 1933, the Official Board thanked the janitor, the music staff and Dr. Arthur Cates, the pastor, each for donating one month’s salary to the church. At the same time they ordered the phone removed from the church.

During Dr. Cates’ pastorate, he arranged with Rev. Vance of the Presbyterian church for a period of union services in the summer to allow each pastor time for a vacation. In the 1960’s this was enlarged to include all four downtown churchs: Methodist, Presbyterian, Baptist and Christian. These union services continued until the late 20th century. 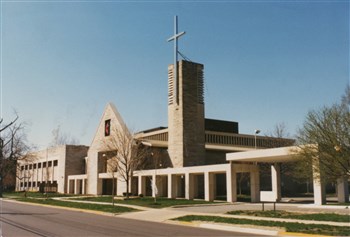 Space became an issue and in September 1951, at the request of pastor Dr. Gordon B. white, the Official Board approved two Sunday worship services – at 8:45 and 10:45 a.m. – the first local Protestant church to take such action.

A Saturday worship service began in December 1991 and continues today.  Additional staff was added to accommodate the growth with an associate pastor’s position being inaugurated in 1965.

One of the strongest partnerships has been the serving of the campus community and its students. In 1920, the first funds were allocated for student work, namely the Wesley Foundation. The University of Illinois established the first Wesley Foundation in 1913.

Although it would be 1943 before a full-time director would be hired, the ministry shared space and facilities with the church on Fell Avenue. When a new site was discussed, a priority was given that the Foundation could have an area of its own.

The final plans for the School Street facility included an office, lounge, recreation area, dining room, full kitchen and restrooms on the lower level for the Wesley Foundation. The Central Illinois Conference provided $100,000 toward the construction of the church building to house the Wesley Foundation, with other areas of the church available on a reservation basis.

From 1986 to 2006, at least 30 young people from the ISU Wesley Foundation answered the call to ministry by attending seminary following graduation from ISU. From 2006 to 2014, another eight have followed.
News