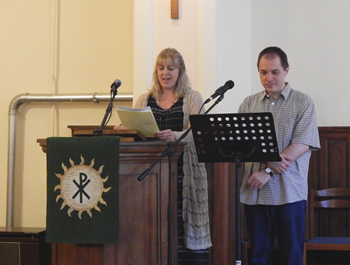 The first of the three team goals was building relationships through worship and fellowship. Dr. Steve Heitkamp brought the sermon at the Pest church on Sunday, June 21, while his wife Mindy Heitkamp sang a special. The Americans were guests at a church potluck following worship. Home stays and continued interaction during the week helped build lasting friendships.

The Illinois team taught conversational English classes to the students of Forrai High School in Budapest from Monday through Friday as the second goal of the mission. Forrai is a private school that offers preparation for college and careers in art and fashion. Knowledge of English opens many doors for work and growth to native Hungarian speakers. Heather Durham, a Wesleyan missionary serving in Budapest with her husband Ed, joined us so we could offer five classes at different levels of English ability.

During the week we began each day with games and a Bible lesson, taught English for the remainder of the morning, ate lunch with the students, and interacted with them as they did art work or took field trips in the afternoons. We averaged 35 students each day, the majority incoming freshman with a couple of returning sophomores. Hungarian helpers from the Budapest churches were assigned to each class. 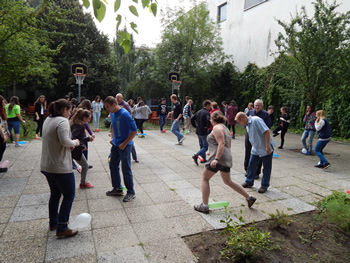 Kelly Pierce and Ken Hutchens from Mattoon First UMC were able to build on relationships began last year when they were part of the first team to Budapest. The Hungarian helper in Hutchens' class was a student last year who has developed both her English capability and her connection to the Hungarian United Methodist church. Visits from other students who were part of the English camp last year encouraged us that we were making a difference in tangible ways in their lives.

The third goal of our work was outreach with our partner church. Pest UMC hosted two events which drew upon the expertise of group member Steve Heitkamp. Steve, who has a Doctorate of Ministry in counseling, is an elder in IGRC on extension ministry with Horizon Hope Counseling in O'Fallon. Steve used his counseling knowledge to lead a session on parenting teenagers. Church members, parents of the students at the Forrai school, and the Hungarian public were invited to attend. Two days later Steve led a training session at the Pest church focused on counseling a friend or family member in need. 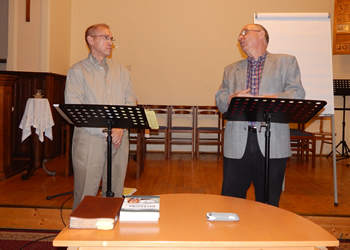 The finale of the week was the graduation ceremony at Pest UMC. Students and parents joined church members for games, skits, songs, presentation of certificates, food and fellowship. The relationships built between the people of Pest UMC and the students and their parents from the school allows continuing sharing of the Gospel of Jesus Christ.

Plans are underway for our third trip to Budapest. For a brochure on the 2016 Hungary mission or more information on how you can be involved, visit www.igrc.org/hungary or Facebook users can visit Illinois-Hungary Methodist Partnership at: https://www.facebook.com/groups/547737708704381/. Persons may also call either Bunny Wolfe at 217-529-2749 or Ken Hutchens at 217-390-1566. 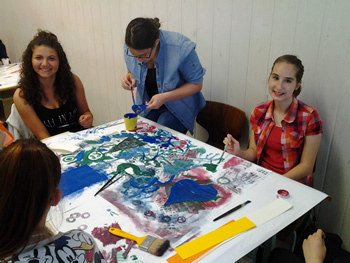 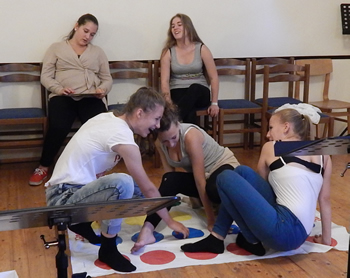