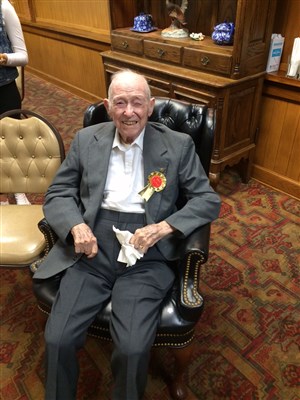 Rev. Dickey was born in 1915. During America’s Great Depression, an 18-year-old minister’s son in Newton decided the best thing he could do to help his struggling family was to simply go away.

Dickey decided to join the Civilian Conservation Corps, President Franklin Roosevelt’s New Deal program to put young men to work building parks, planting trees and restoring land while getting a monthly paycheck of $30 -- $25 of which had to be sent home to family. In August 1934, Dickey arrived at the newly-created Giant City State Park in Makanda to live in the barracks of his assigned CCC work camp, #692.

Construction of the landmark stone-and-timber lodge had just begun. Dickey joined crews with saws, shovels and sweat as they built the enduring structures and roads that define the park today. Dickey eventually finished his CCC career battling forest fires in Wisconsin, went to college, married his sweetheart Juanita and became a minister himself.

Decades passed. Rev. Dickey retired but he never forgot the helping hand he was given at this now-famous Illinois state park. When the Dickeys returned to the area in 1999, they became volunteers at the park’s Visitor’s Center. Already well into their 80’s but full of kindness, they greeted all strangers, gave directions, explained what needed to be explained and served.

Juanita died in 2012 at age 94, but Earl continued to drive himself to the Giant City Visitor Center each week to do what lifetime volunteers do. Years and birthday continued to pass. Then, on Sept. 8, Earl Dickey celebrated his 100th birthday at the one place on Earth that defines his century of public service – Giant City State Park.