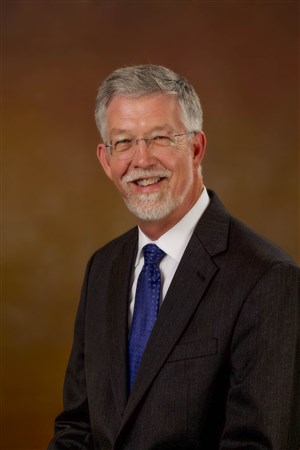 BLOOMINGTON — The Illinois Wesleyan University Board of Trustees announced on Sept. 14 that Eric R. Jensen of Hamline University has been selected to serve as the University’s 19th president. Jensen was named following a national search, which began in February. He succeeds Richard F. Wilson, who announced his retirement in December 2014 and will step down at the end of October.

Jensen served as Hamline’s provost from 2012 to 2015. Located in Saint Paul, Minn., Hamline enrolls approximately 4,900 undergraduate and graduate students in its College of Liberal Arts, School of Business, School of Education and School of Law. Previously, Jensen served as a professor of economics and public policy at the College of William and Mary in Williamsburg, Va. From 2004 to 2012, Jensen also served as director of William and Mary’s Thomas Jefferson Program in Public Policy. A research university with a strong liberal arts curriculum, William and Mary is also the nation’s second oldest institution of higher learning.

“I am extremely proud to have been selected to lead this fine institution and to join with you in promoting the values and importance of the University’s liberal arts mission,” said Jensen.  “I remarked on my recent campus visit how at home I felt walking onto this campus, and how impressed I have been with the people I’ve met. It's the people who bring a university’s mission to life, and through their efforts and innovative approaches, distinguish it and prepare it for the future. Today this is more important than ever, as we face a changing higher education landscape. I look forward to working with the Wesleyan community to address the challenges that lie ahead."

Jensen will bring to Illinois Wesleyan a broad portfolio of academic and administrative experience. As Hamline provost, he oversaw undergraduate and graduate programming, academic advising, student affairs, intercollegiate athletics, the libraries and the international and diversity programs. In addition, Jensen had significant budgetary responsibility, working closely with the chief financial officer in developing the university’s overall budget. He also created a process to successfully deal with the significant budget shortfall that existed when he arrived at Hamline. Jensen also led curricular strategic planning and preparations for an upcoming major fundraising campaign.

“We are delighted that someone with Dr. Jensen’s passion for the liberal arts and extensive experience and impressive record of accomplishment as an administrator, faculty member and scholar has accepted our invitation to serve as the 19th president of Illinois Wesleyan University,” said George A. Vinyard, chairman of the Board of Trustees. In addition to being appointed to the presidency, Jensen was awarded a tenured professorship in economics.

Vinyard expressed the University’s gratitude to outgoing President Richard F. Wilson for his excellent service to Illinois Wesleyan, and to Mrs. Pat Wilson for their collective contributions to the life of the University community over the past 11 years. He also extended the Board’s thanks to Search Committee Chair Jean Baird and each of the committee’s trustee, faculty, staff and student members for their hard work over the past six months, culminating in a great result for the University. Vinyard invited the campus community to personally congratulate and welcome Jensen and his wife, Elizabeth, at an afternoon reception.
In commenting on the presidential search process, Baird noted how impressed the committee and campus community were with Jensen’s experience and how well he connected with faculty, staff and students during his visit to Illinois Wesleyan’s campus.

“Dr. Jensen’s portfolio of responsibilities at Hamline went beyond that of most provosts, and included overseeing student affairs and working with the chief financial officer in the development of the institutional budget,” said Baird. “We also valued the fact that he has had fundraising and external relations experience, both of which are important roles for our president. And importantly, we received feedback from representatives of all campus constituents that he had the kind of personal qualities they were looking for to lead the institution in these very challenging times.”

Baird also pointed to Jensen’s tenure as director of William and Mary’s Thomas Jefferson Program in Public Policy, where he was responsible for programmatic and curricular initiatives, and managed relationships with government agencies, nonprofits and private firms on a range of policy-relevant projects. He was also actively engaged in recruiting and cultivating donors, and recruiting and working with a 30-plus member external board of advisors.

President Wilson, who was on hand for the announcement at the Hansen Student Center, congratulated his successor on his appointment and along with his wife, Pat, presented the Jensens with a ceremonial key to the campus.

As a faculty member at William and Mary, Jensen was an active scholar and researcher. He worked for four years with the College Board to develop and implement its Financial Aid Strategy Tool (FAST), which enabled participating institutions to individually tailor financial aid offers to admitted students. He was named a Senior Fellow in the Program in Population at the East–West Center, Honolulu, and served concurrently as Economist, Office of Population, USAID and a Council on Foreign Relations International Affairs Fellow, based in Washington, D.C.

Jensen was also a Visiting Scholar in Economics at the University of Indonesia, has evaluated HIV-AIDS efforts for the World Bank and reproductive health programs for USAID, and served as guest editor of the Journal of Philippine Development and the Philippine Population Journal.