Acts Bible Study to be released for post-Easter use 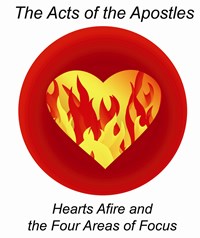 2/26/2010
A six-week Bible Study on the Book of Acts, which brings together scripture, the teachings of John Wesley and the Four Areas of Focus, will be released online March 1 for IGRC congregations to use in the 50 days leading up to Pentecost.
The Acts of the Apostles: Hearts Afire and the Four Areas of Focus is a collaborative effort that has involved a team of writers and resource people across the United Methodist connection.
“Following last year’s Annual Conference, Bishop Palmer came to me with an idea about doing a conference-wide Bible Study on the book of Acts,” explained Rev. Dr. Kent Lolling, IGRC Director of Connectional Ministries. “We dreamed together about what it would be like to have a large group of United Methodists in our conference studying the same book of the Bible and the impact it could have on the spiritual life of our conference. Elements of the study would incorporate Wesley, Scripture study and reflection, a challenge to the church as well as look at the book of Acts with the lenses of the denomination’s Four Areas of Focus. So in September (2009), a group of authors were gathered and work on the study began.”
The Bible Study consists of two components: daily participant readings and weekly group lessons. The delivery via download is an attempt to provide delivery in an easy to use format. The study could be used by existing Sunday school classes, small groups, or Bible study groups, or by new groups formed specifically for this short-term study. While the study was designed for use by adults, it could be adapted for use with youth.
“It our hope and prayer that congregations of the Illinois Great Rivers Conference will be blessed by this work and use it as a tool to spiritually enrich their congregations and motivate them to not be afraid to move forward into the mission field as the Holy Spirit gives them power and direction, Lolling said.
Each daily reading includes a passage of scripture or an excerpt from one of John Wesley’s writings, along with one or more questions for reflection, a prayer or prayer suggestion, and a space for recording notes. The full text of each reading is included in the daily reading material. Scripture passages are taken from the New Revised Standard Version of the Bible. References are also provided, so participants may also choose to read the scripture passages in their favorite translation.
“From the beginning there was great enthusiasm among the authors and it seemed the Holy Spirit was really moving among us,” Lolling said. “Ideas seemed to build off one another suggestions, rather than compete, and when one of us hit a stumbling block another of us was right there to pick it up and continue on. It was a true collaboration and a joy to work with each of them.”
Authors of the Bible Study include: Sara Brown, pastor of Carrollton and Christ UMC in the LaMoine River District; Beth Fender, IGRC New Streams Coordinator; Teresa Gilbert, discipleship coordinator for Murphysboro UMC, Cache River District; Atsuko Lolling, member of Springfield Laurel UMC, Sangamon River District; Kent Lolling, IGRC Director of Connectional Ministries and Bill Pyatt, pastor of Mt. Zion UMC, Sangamon River District. The writing team was also assisted and encouraged on the journey by Steve Manskar, Director of Accountable Discipleship at the General Board of Discipleship.
“Every one of us brought something unique to the table that made the final product better than any one of us could do alone,” Lolling said. “It was amazing how each of our giftedness fit so well into the different chapters. God was truly working in and through the creative process.”
A Facebook group, IGRC Acts Bible Study, has been created as a place to not only share additional downloadable resources but to provide a place of discussion and interaction as IGRC congregations study the material together.