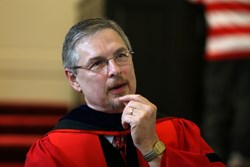 Harter, who has served the past 14 years as pastor of Champaign First UMC, will succeed the Rev. Gerald King as conference superintendent. King was previously appointed as pastor of Springfield Laurel UMC.

“Dr. Terry Harter has been an outstanding pastor throughout his ministerial service. I am confident that he will be an excellent Conference Superintendent,” Palmer said in making the announcement. “He will bring to the cabinet and the congregations and pastoral leaders of the Sangamon River District a deep faith, a keen mind, a listening heart, a creative edge and a ready sense of humor. I am grateful for his willingness to serve in this particular ministry role at this time.”

“I look forward to serving my sisters and brothers in Christ through the ministry of the superintendency,” Harter said. “I invite your prayers, your counsel and your support as we continue the journey of making disciples whom God can use for the transformation of the world.”

Harter added that the new chapter of ministry is one in which he is “humbled and honored” at the same moment. “And more than a little anxious that I can live into this calling,” he added.

In describing the recent turn of events, Harter displayed some of that ready sense of humor when he said he felt like Moses. “One afternoon I was tending the flock in the East, at Champaign, and the next morning I was looking at the burning fire of the Cracker Barrel,” Harter explained. “ I heard Bishop Palmer call my name, ‘Terry, Terry. I have seen the people, pastors, and congregations of the Sangamon, and I will lead them....So now I am sending you.’

“Of course, I am well aware that I'm not Moses, but I think I have some sense of what he was thinking and feeling out there in Midian. I'm not the one you want. I'm not sure I can do this, I've read The Book of Discipline paragraphs 401 through 435, and there are at least 43 priority tasks."

Harter was ordained a deacon in the North Indiana Conference in 1970 and was ordained an elder in 1978. After serving a year as a pastor in the former Southern New England Conference and a year as a visiting instructor at the Southern California School of Theology at Claremont, Harter transferred to the former Central Illinois Conference and began an 18-year pastorate as an associate minister at Peoria First UMC. In 1996, Harter was appointed pastor of Champaign First UMC.

Harter and the former Martha J. O’Dell are the parents of two grown children, Emily and Edward.