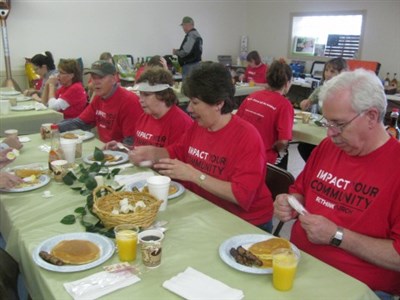 When Mike Crawford, the Director of Congregational Development for the Illinois Great Rivers Conference, visited with the Administrative Council at Prospect United Methodist Church in Dunlap, he told them about his own church’s free—completely free—car wash. They were intrigued by his words and began to consider the possibilities. When the Change the World event was shared with them only a few weeks later, it all started coming together.

There was no question about their participation in the weekend. Community outreach has always been a focus for the people of Prospect, and they had been helping support the denomination’s fight against malaria for several years. There was no question—they would show the Village of Dunlap what happens when church leaves the building.
On the morning of April 24, over 50 devoted members—clad in their red “Impact Community” t-shirts—hit the streets of Dunlap to pick up trash and other debris around town. Having split their community into sections, four teams swarmed the various neighborhoods leaving a wake of…nothing behind. For two hours, they toiled, and then, they all reunited at the local Legion Hall for what many have called “a true God moment.”
The Legion was hosting an all-day fundraiser for Multiple Sclerosis, starting with a hearty breakfast. Prospect’s team needed some nourishment. What better way to get into the community than to get involved—all dressed in red—supporting a very worthy cause? Several members were asked about the large group and beamed as they spread the world of their mission.
Despite the questionable weather, they continued the day with a free car was and free throw contest in the church parking lot. The car wash, in appreciation of Crawford’s suggestion, was completely free—not even donations were accepted; the free throw contest, a fundraiser for Nothing But Nets. But they didn’t stop there!
The next morning brought the results of the prior week’s challenge: raise $1,000 for Nothing But Nets and Reverend Mary Kathryn Pearce would match it. The congregation not only met her challenge, but exceeded it. A grand total of $2,760 was raised for this pivotal United Methodist ministry—a wonderful way to kick start the United Methodist Imagine No Malaria campaign.
Later that morning, everyone gathered in the fellowship hall for another fundraiser—and lunch. The chicken noodle dinner was established to raise money to help fund a summer medical mission trip to Kiev, Ukraine. And even after all the time and money they had already given, their generosity continued with free-will donations totaling over $1,000!
The entire weekend was one of joy, and giving, and love. Prospect showed their community how God can work through his people to make a difference in the lives of others to Change the World!
News