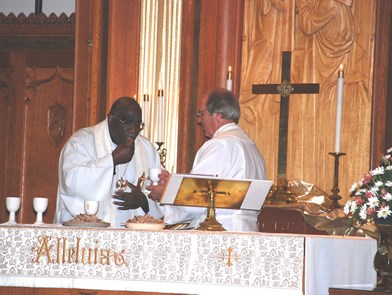 SPRINGFIELD – Bishop Gregory V. Palmer remembers clearly a conversation on an air flight from Atlanta, Ga. to Bloomington, Ill., that was instructive.

“In those times, I am often asked what I do and I usually start by saying I am a preacher,” Palmer said. “But when the woman found out I was a bishop of The United Methodist Church, she asked the question, ‘What’s the difference between United Methodists and Catholics (the faith of her childhood. I found in that moment I am constitutionally unable to start by describing where we differ.”

Palmer shared the story May 15 as he delivered the sermon at a celebration service for the full communion agreement between The Evangelical Lutheran Church in America and The United Methodist Church.

The full communion agreement is not a merger of the two denominations but a recognition of those things we hold in common. The agreement also allows for greater shared ministry and deployment of pastoral leadership, although each denomination retains the choice of using or not using particular pastors or ministries jointly.

Palmer, quoting the poet Maya Angelou, told the gathered crowd, “We are more alike than we are unalike.”

“We should always begin with what we share in common with each other. It changes the conversation; it writes a different story,” Palmer added. “If we stay on that street always (of how and what we differ), we will do less good than if we look at what we hold in common.”

Utilizing the text of the Prodigal Son, Palmer quoted the father in the story when talking about the full communion agreement.

“We had to celebrate,” Palmer said. “It is meet and right to begin with a party. Too often, we don’t party enough and when we do, we keep the party to ourselves. There is a deep yearning for a sense of unity within the human family.”

Palmer pointed out that the church has the opportunity to model to the world ways in which to remain engaged even in times of differences.

“Don’t we have something to say about the acrimony in the halls of Parliament and Congress, state legislatures or city hall, where the acrimony keeps persons from finding resolution for the common good?” he asked. “Jesus prayed that we all might be one as He and the Father were one. I am committed to finding the sweet spot in our unity and inspiration for the hard work of unity in our world.”

Bishop Warren D. Freiheit of the Central-Southern Illinois Synod of the ELCA, presided over the Service of Communion and persons from both denomination served in a variety of capacities within the service.

Sharon Brown of Springfield Kumler UMC and Guerry Suggs of Springfield Douglas Ave. UMC were communion assistants with a combined choir under the direction of Jean Welch, provided an anthem accompanied by the St. John’s Lutheran Church orchestra.