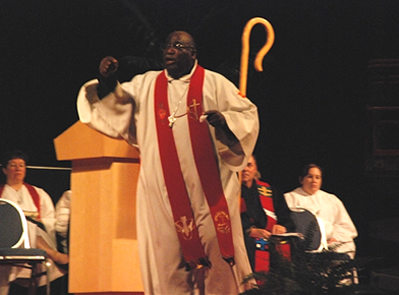 PEORIA – Bishop Gregory V. Palmer said the call to be trustworthy prophets is not exclusive to clergy but is a call to “get with God’s program.”

Palmer said that such prophets learn to listen, develop skills to deeply listen and tell the truth.
“May it be said that when God looks for trustworthy prophets, God will say, ‘I found them in central and southern Illinois,” Palmer said. “God doesn’t need a lot and if a few will be obedient, God can rock this world. In fact, God can work with you even if you misinterpret the direction initially.”
Weaving the story of the call of Samuel throughout his sermon, Palmer noted that not much has changed in the centuries that have past since the ancient story.
“We live in a world with a huge trust deficit and it really isn’t anything new,” he said. “There have been profound seasons throughout history, including the time of Samuel where the Word of the Lord was rare.”
Palmer said the key to the trust deficit was sin and corruption in temple life. “When the institution is strong in its proclamation, trust is restored, but when temple life gets off track because of taking care of oneself, trust is diminished. When it’s all about you, it isn’t about the mission.” And to the ordinands, he added, “This is your night but it isn’t all about you.”
But Palmer noted that the temple isn’t the only place where trust is diminished. “What can happen in these robes can happen in local churches, in annual conference and in denominational offices,” he said. “It is expressed like, ‘we never did it that way’ or ‘we don’t want that kind of people.’ [When that occurs,] voices are muted and our mission becomes unclear. Welcome to ministry in the 21st century!”
In learning to listen, Palmer told the new ordinands that it is in the partnership of old and new that God can work. “An old worn-out priest played his part at keeping God’s program going at Shiloh,” he said.
In developing skills for deeply and really listening, Palmer acknowledged the journey is not without risk. “If you don’t want to know what you should be doing in the future, then don’t ask God because God will tell you and it can shake up your world,” he said.
Palmer also acknowledged that telling the truth is fraught with risk. “It’s hard to tell the truth to those signing your paycheck, but in the large scheme of things, it is the way to be trustworthy, because we have a God to glorify.”
The issue of truth-telling is not due to a lack of knowledge. “We’re not wanting access to the knowledge because it requires conversion,” he added. “But Samuel’s legacy was a heavenly postscript, for the writer says that Samuel was known as a trustworthy prophet.”
News