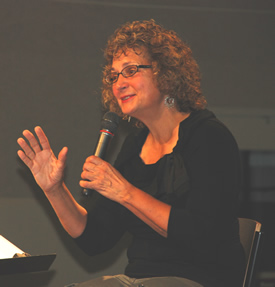 The Office of Congregational Development embarked on a new concept in 2010 aimed at assisting churches in their core processes.
The Fruitful Congregations Leadership Institute, based upon the best-selling book by Bishop Robert Schnase, began its initial offering with a workshop on Passionate Worship in Normal in September.
FCLI is designed to bring new life and fruitfulness to congregations. The process includes five workshops over a 2 ½ year period, each based on one of the practices of fruitful congregations.
In all, 24 lay-clergy teams from IGRC congregations began a 2 ½ year commitment to five different learning experiences. A second workshop will be held in the Spoon River District in March 2011.

Mission and Outreach – Locally and Globally

In addition to our mission work in Haiti, IGRC congregations continued their partnership with the people and churches of Liberia.
In February, the Fellheimer Trust of Macomb Wesley UMC approved as $20,000 grant toward the building of the John Kofi Asmah United Methodist School in West Point, near the capital city of Monrovia.
A team in October completed construction on another school, the I.J. Williams School in Unification Town, and a group conducted teacher training when they traveled to the West African nation in July.
The conference also began moving toward a relationship with Honduras as Alton Main Street UMC hosted a General Board of Global Ministries summit Oct 6.-9.
Congregations were also mobilized in disaster response when a tornado ripped across the northern end of the conference June 5.
Several disaster response trainings were held in the summer and fall months. A team of workers from East Alton First UMC acted as first responders in Cedar Rapids, Iowa, in the aftermath of flooding.
The Dwight UMC sustained damage as part of a 16 square block area near the church. Windows were blown out of the child care section of the church as well as other parts of the building. Parts of the church’s roof were also torn off by the tornado.
Arson was suspected in an Aug. 1 fire that damaged the Midland UMC in Kincaid.
Damage was sustained throughout the building and sidelined the church’s food pantry. Despite the fire, worship went on as scheduled at Kincaid High School and community leaders rallied to restock and replenish the food pantry that serves around 80 families in the community.
Parish nurses throughout the conference gathered Aug. 6-7 for the second annual parish nurse retreat – a time of renewal, networking, worship and celebration.

Communications and technology continue to move a breakneck speed and the IGRC Communications Team continues to facilitate connections throughout the conference.
On May 15, the new IGRC website was launched, replacing a three-year old system. The new website incorporated features in response to a user survey initiated in the spring, providing easier navigation and more information.
The website was judged the best annual conference website by the United Methodist Association of Communicators.
Video production manager Suzy Burns also took top honors for her visual design work on the 2010 Senior High YAR promotional video.
The Current, the monthly publication of the conference, also underwent a facelift in September. The new look gives the publication more of a magazine or feature news vehicle.